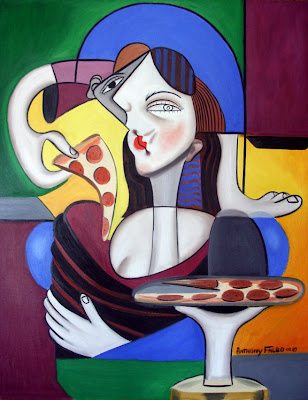 www.falboart.com/.../cubestractions5.htm
Thought this was a nice painting

Not only is March break a riot but during the year there is always something going on to entertain and impress you.

We had a group of friends we studied with . One was a foreigner from the middle east.

I never quite knew from which country exactly but he was a happy go lucky fellow, always smiling and laughing.

He was a nice looking guy with curly black hair and mischievous dark eyes with long eyelashes,

some would call bedroom eyes.

We had this pizza place we went to quite frequently.

One day the waitress came to take our orders and after finishing with us she came to this fellow.

He said, looking at the menu, he wanted an all dressed pizza.

He waited for her to write this down and then he began slowly to undress the pizza.

He said oh…….I don’t want the anchovies. So she scratched it off

And…..oh take off the green peppers. So she scratched it off

Oh and I don’t think I want the pepperoni either. So she scratched it off

The waitress was a very busy girl and taking all this down very professionally and seriously.

After each scratch she kept wanting to leave to put in the order but he kept pulling her back.

Once he got to that, everyone was sitting watching her face change and her eyes grow big, as she realized that the pizza was no longer

All dressed but completely naked.

She stopped and looked at him finally with her mouth open and he sat there,

his usual smiling bratty self .

The whole scenario was uncomfortably hilarious.

As we all cracked up she did too and then he said ok .Just give me the all dressed.

By this time her pad was a complete mess and I am sure she had to rewrite the order on a new order sheet.

But now she also loosened up and I guess this little prank brightened up her day as well.

How could any one resist such a handsome guy with those bedroom eyes, slowly undressing a pizza in front of her eyes.lol

Yes, sometimes things like that help to make a day brigther.

LOL! I can imagine she couldn't!

LOL. Does he go to the deli and order two slices of everything?

I'm glad she had a sense of humor about it and I hope you guys left a good tip.

Glad she could laugh about it!

Oh ya! She began to know him very well cause he always kidded her.
He was just that sort of guy, with the special look that no one could get angry at him.
Besides we were all kids and so was she and we went there often.