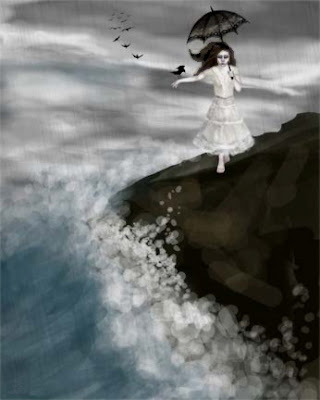 Mama Zens blog spoke of a book Spirited by Rebecca Rosen.
Most people do not believe in spirits and I personally have never met any to talk to although I wish I could like they do in Medium and the Ghost Whisperer.
You get to find out so much from spirits if this could be true.

But living in Singapore, I once heard a funeral over the wall of our estate. When a person died there, the Chinese bring the body home and they make all his special things out of paper that he might need in the next world. So he has a car, his favorite slippers, pipe etc...and money to pay the devil to get out of hell. They also hire criers who cry over the body and people who bang pots and bells to keep evil away. So this was what they were doing when I was sitting in my living room on the floor writing a letter to my Mother explaining what was happening.
I wrote "Mom they are clanging and banging to keep the devil away.... and as I was writing devil,
the lamp in my dining room burst with such ferocity that the glass pieces flew across the room all the way to the glass table, maybe 20 feet, where I was sitting at on the floor. I was dumb founded.
And I felt eerie as if they kept him from crossing the wall and so he was angry at my place and showed me since I brought the topic up. This why they say evil comes when you invite it in and I guess by talking about him I was inviting him in. lol
I told my friends who told me about the spirits that lived in the Raffles hotel.
They had one woman who was always crying in one room and then a few ladies came down for tea once dressed in long gowns and white gloves with umbrellas and they had tea in the outside
garden where tables were set up. Once they left a customer asked the waiter who they were and he asked him who are you talking about. The customer said those two ladies having tea at this table. The waiters eyes grew big and he asked the customer what they looked like so he explained, The waiter left and brought in the manager who told them about the hotel ghosts. These ladies were included
One woman told me about about an old empty cement pool that had people walking inside as if they didn't know it was a pool.
The Chinese believe in ghosts.
My Mom did the ouiji board until it spelled out I am the horned goat meet me at midnight. She dropped everything and never did it again.
One of her friends on new years, sat by a three sided mirror. The thing to do was to place the mirror in front of an open window and then keep looking in it and as soon as you get a glimpse of your future husband you turn the mirror over. Well she wanted a closer look and was beaten up.
There have been cases girls were beaten to death by the spirit which walked through.

Some people have 7th sight and I believe in that.

When my grandfather died, I was sleeping and opened my eyes just to see him looking over me and smiling. I thought Oh grandfather is here and I am safe, I can sleep now. That same night he came to my mother in the kitchen. She turned around from the sink and saw him and he asked her for a cup of coffee. She said sure and turned to make him one then remembered he died. She turned and he was gone. She wasn't sleeping. She was washing dishes. So he came to the both of us the same night to say good bye.

I think all people have 7th sight but our brains are so cluttered, we don't see.
You need to be in a certain frame of mind to be able to do this. In my case I was a child and just about to fall asleep and my Mom probably was also numb from her fatherinlaw, who she had a good relationship with, dying.

There were other things too that happened so when it comes to spirits, I am not so certain I don't believe in them. If they exist, then all the rest must be true too. Shirley McLean tried to experiment with the un explainable and she said she could fly on a string far away from her body.
She could go to different places and see different things. Once I was meditating and I got to a point where I felt something leaving my body and I got scared and woke up. I thought if I let it go, it won't come back but what a journey I would be on. I could fly.
You forget to breath at that moment.
For me this is risk taking I am not prepared for. It could end up in death if you stay away too long and you have no concept of time doing this. Someone has to pull you back.

One needs to understand that we live with limits. Our eyes do not see as well as, say a bee.
Our sense of smell is not as good as a wolves or a sharks.

So we speak in terms of our experiences and paradigms but sometimes things sift through and we are given a taste of the unexplainable.
I can live with that. :)

Interesting. I believe in the Spirit. I also believe the noise in our minds keeps us from becoming familiar with it.

yes, at times,
I believe in spirits...
you have sharp observations of stuff ...Happy Monday!

Interesting post. I share your opinion, and I wish I could see them and talk to them too. But my seventh eye is not good enough I'm afraid.

Hi Lady! Interesting post!!
Sorry for the absence, but my computer broke down and I’ll be waiting a month for it to be fixed… ;-( Anyhow, I left you a post on the suburbs of Ephesus for you to enjoy. Have a great week!!