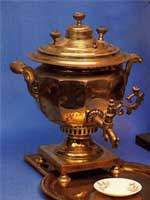 I have always loved the idea of making tea in Samovars.
My cousin, once upon a time ago, brought me one antique, having no idea of how much I would love it I never used it as I wouldn’t even know how, but I polished it and cleaned it and then would sit for hours admiring its’ handicraft.

In my imagination I could see this Samovar in it new shiny state being used where?
Maybe in a nice cultured home where tea was prepared, in the English afternoon fashion, or maybe it lived in a poor old farmhouse, keeping old hands warm or maybe it lived in a teahouse (called a traktir), and its tea was sold like we sell coffee today in the shops.Or maybe it had a fair amount of travelling to do since coming from the 18th Century, it went through civil wars, the Russian revolution and two world wars.

Maybe it had several owners who died many times over and now it came to me, here, all the way to Canada. If only it could talk….. what stories it would tell. 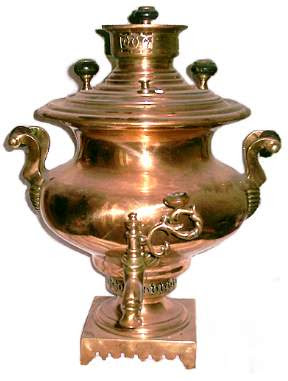 The very first Samovar was created in Tula, Russia, in the 1800’s by a man named Lysitsyn
( by the way, the root word, lysa, means fox loll).
Lysitsyn was a gun smith. He designed this samovar for him self, to run on charcoal.
The tea from it was sooo delicious, that the idea caught on and spread like wild fire and before you know it, Tula became famous for its’ Samovars.
Today’s Samovar is used as a decoration piece or it can be bought in an electric model. Like the Faberge Egg, it comes in many styles and colors. They are still wonderful topics of discussion, as you sit serving your guests, the best cup of tea in the world.
Posted by A Lady's Life at 6:02 AM

What a very beautiful piece ! Such an artwork !

It is very beautiful. Nothing like the teapots in today's society. I love tea and I keeps saying I want to have a Tea party. I have no idea what I'm waiting on????

Thanks for a really nice post and being such a breath of fresh air!

Love for a Happy Sunday and a great cup of tea. We have a place in Largo, Maryland called Infusion Tea Cafe. I remember my first visit thinking, there are just too many choices. Now you've made me want to go back and take a closer look and try something new.

Tossing Pebbles in the Stream said...

Itis a lovely piece. I have a old sideboard made for such a piece with a little leaf the folds up to put the cups on.

I just wanted to reply to your comment on the post I made about Dorothy Smith...women's studies is not about being a hardcore feminist and swearing off men. It's about understanding that women have had experiences that have not been represented throughout the course of history, because prominent historians/politicians/sociologists, etc. were men. This realization also helps us to see that there are other groups whose voices have not always been heard. Basically, Dorothy Smith has opened up a discourse to re-examine how various groups are represented within history and other disciplines...

It has nothing to do with women's liberation--i.e. women going to work instead of staying home and starting a family. It's more of a study of ALL women's experiences, not just the very small percentage of women that manage to make a huge impact on a field of study or a part of society...

In fact, I'm pretty sure that Dorothy Smith had a family and everything. It's just that what we typically consider to be women's roles (staying home) are greatly devalued in our society, though it has been proven that they are some of the most valuable, with the most time poured into them. And, for women who enter the workforce, they are still making about 74% LESS than their male counterparts. In general, women's contributions are somewhat undervalued (or greatly undervalued!) so that's what women's studies are about now--the views held by society about women, and how to make women's roles/contributions/experiences valued more equally.

Hi Elyse.
I responded to your above comment on your blog so you get a chance to read it.I totally understand the issues here, I am just wondering how a person plans to do everything on his /her own.Women may feel they are undervalued but I seem to have heard something about men having the same feelings too lol There is no justice in life.
To my knowledge and from experience in life, you can't do it all. Family is important and the women who are writing in seem to be expecting miracles, that unfortunately will not happen for them. Balance is important to have in life.You can't balance, if there is no one at the other end to balance you. Everything just ends up sliding to one end.The issues you are talking about are the same issues, just different people talking about them, which means after everything we have said and done in the past,to get women rights they never had before, women have not learned a thing.Its not as simple as it all looks.Wish it were.:)

I drank tea made with a Samovar when I was working in Russia. I even considered of buying one. There were many beautiful and exquisite models. Elaborate ones and at affordable prices. But at that time was worrying more about carrying laptops and files with me. And I did not want to be troubled to travel with additional things. So, I did not bring home. That was stupid and I regret it.

Hi Lady! Beautiful set! I remember my first samovar tea: it was in 1977 on a train between Moscow and Minsk. Amazing! ;)

Now, you wouldn’t guess where Blogtrotter is on its last post... ;)
Enjoy and have a great week!

Hi Guys! Blog trotter I visited you and as usual enjoyed everything!
Peter, too bad you didn't ship one samovar home. It would have been a nice keep sake.You can still buy them on line and in some little deli stores. I almost bought one I could actually use. Maybe I still will.
Tossing pebbles in the sand: I know. A display such as this is soo nice.
I have lots to display but it requires things like you have to hang things on.
They will be my future projects to do as I sift through my boxes.
Butterfly and Gattina, thanks for your nice comments. The world is indeed a place of discovery and you never know what you come up with next. lol
:)

I've never seen a Samovar. This is so sexy, so beautiful...so Russian? I half expect a plate of blinis and caviar to come my way...