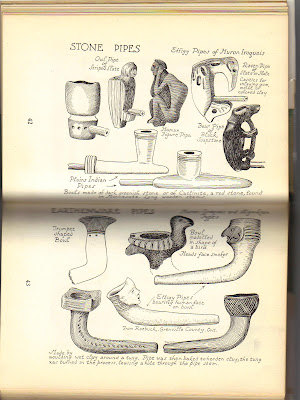 Smoking was introduced to Europe in 1550, by Francisco Fernandez, who brought tobacco to Spain.
Jean Nicot, French Ambassador to the Court of Lisbon, sent seeds to France and 26 years later
Sir Francis Drake and Ralph Lane also brought tobacco and seeds to England.

Tobacco belongs to the potato and eggplant family. It’s existence was known from around 300 BC.
There are around 60-70 different varieties of tobacco.

Migrating Mayas from Central America, introduced the art of smoking to North American Indians.
Indians used cohoba as hallucigenic snuff
Some swallowed smoke
Some made cigars
Basically it was a revered herb and used in every household as medicine against all kind of diseases, fever, plague, sores, wounds, chest and throat discomforts.

Jacques Cartier saw Iroquois inhaling smoke through elbow shaped pipes in 1545 but
they were in no way limited in shape as we can see from the above pics.
Posted by A Lady's Life at 6:54 AM

This is interesting for me, as a smoker, to read. I like the medicine part for the throat discomforts.

On our packet it says now that "tabagisme" can provoke throat cancer.

They found something in tobacco for parkinsons but on the whole tobacco is not beneficial to your health lol
What I found intersting were the different pipes they smoked in. I guess it had to do with the tribe or family you came from.It started in south America moved up into North America and then landed in Europe. One would think it would be the other way round.:)