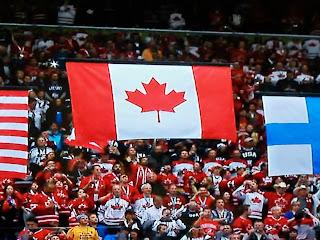 Well said by someone who knows Canadians.

We never claimed to be perfect,
That means we’ve learned to be humble.
We say excuse me and I'm sorry…as well as please and thanks,
Even when its not our fault we apologize.
Sure one arm of the torch didn't rise,
But when the earthquake struck Haiti, Canadians raised their hands to say…”We’ll help.”
And yah, there is a fence around the torch,
But you can walk right up and shake hands with our prime minister and most famous Canadians.
We put Gretzky in the back of a pick up, in the rain, not surrounded by police…and he was okay,
And by the way... the great one is Canadian…and HE wasn’t complaining!
We do have security at the games, of course, but most people don't even have a gun they have to leave at home.
The medals ARE under lock and key, but our doors and our hearts are open to the world.
It has been pointed out that some buses broke down last week…they came up from California and couldn't handle our steep hills,but let’s not overlook the fact that our banking system didn't break down.
We didn't get the "green ice maker" right this time…but we will, eventually,
Just like we did when we invented the zamboni.
Citius altius fortius
If you don't reach higher how do you get faster and stronger?
Was the first quad jump perfect?
Should we not have given snowboarding to the world "in case" it didn’t take off?
So big deal…one out of four torch arms didn't rise. Good thing we had three more! It’s called contingency planning!
But remember…the Canadarm works every time…in outerspace…and insulin turned out to be okay.
We couldn't change the weather, but maybe we can help to stop global warming.
We don't have the tax base of the US or the power of the Chinese but, per capita, we ponied up for some pretty kick-ass venues in the worst global recession ever.
Sure, some folks couldn't afford tickets, but our health care is universal.
We have shown the world that we can raise our voices in celebration and song, but moments later stand in silence to respect a tragic event...together...spontaneously…and unrehearsed.
What's more, we don't need permission from anyone to have a slam poet, fiddlers with piercings and a lesbian singer tell our story to the world while our multilingual female haitian-born, black head of state shares a box with her first nations equals.
We’ve shown the world that it doesn’t always rain in Vancouver, that you can strive for excellence, but not get hung up on perfection.
And we’ve learned what it feels like to be picked on by some no-name English newspaper guy and we don’t have to take it lying down!
So the point is not the snow, or the hydraulics or a couple guys being 5 minutes late to a ceremony,
We know we’re lucky that these are the biggest problems we've had to deal with in the last couple weeks.
So take your cheap shots…Guardian newspaper and cynics of the world,
We're bigger and better than that.
What's more we're finally starting to believe it!
Posted by A Lady's Life at 8:31 AM

I thought Canada did a beautiful job of hosting!

I am not really very fond of the Americas, both North and South. With three exceptions: Argentina, Chile and Canada.

And projects for the three countries. If only they let me retire, finally.

With Canada, we have some thing: My son went there to make his professional pilot's licence. And I want to cross with the VIA train from Montreal to Vancouver.

Thanks Mama zen I also thought they did a great job. We knw how to laugh at ourselves. lol

You never get bored. lol