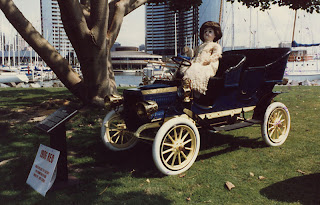 The only time you can say people are social, are in history books where it is written that people fight together in wars, walk together in parades,
sing together in rock and roll band parks,
pray together in a mosque or temple or church, and study together in schools,
But this is where it stops.

When you see a whole bunch of cars driving on city streets, you are not looking at social people.

You are looking at individuals and this makes all the difference.

A person behind the wheel of a car holds, the wheel in a 10 and 2 position and stares straight ahead.

They don’t have necks that turn.

The vision is limited to what is ahead.

There is no left, no right, even when they turn on a corner.

They fail to make eye contact with either a pedestrian or another car because this would mean they would lose their right of way.

Why would they give you, right of way?

You do not need a right of way.

They are on the street behind the wheel and they are the most important driver out there.

What’s more, they wear the biggest of glasses to make sure you can see their huge eyes are not looking at you, thanks to the huge thick lenses

So looking into their eyes, you can tell that even if the law says you have right of way….. you don’t.
I often wonder what would happen if two such thick lensed,big eyed people,ever met on a street corner.
One would have to be driving faster than the other one to avoid a collision and a lot of God’s help would be required since the Devil would find it
amusing to have them crash.

ICBC shows people driving under the influence of drugs.

The car becomes a Mattel toy in their hands and nano technology has improved to a tremendous degree because this car requires no steering.
It is equipped with impressive high speed, intelligence to know where to drive and howto avoid accidents.

This is where the “no such thing as an accident” ICBC teaches applies. I mean how could there be such a thing as an accident when there is an individual driving a high tech car that does all the thinking?
I mean if the car doesn’t think then On Starr can control it from its' satellite.

This certainly gives one lots of time to drink,smoke,pot up,
talk on the phone, watch tv ,play the drums and even do the Michael Jackson Moon walk on the front windows to the swing of the wind shield wipers.

Its all individual, because where one can do it, the other can’t.

The third type of individual that drives is the star struck one.
You know,the ones whose head is in the clouds.
Whatever they are thinking about, it certainly is not about driving
It might be about the fight they had last night, or the love they made last night or the break up they are planning or
What is that guy/gal thinking about me right now. or Gosh I need a smoke sooo bad Where are my patches?

Or they are pretending to be tough ol 50 cent or sexy Tiger woods…….playing golf?


Mercedes sits with her lipstick and mirror.

The Avenger, with the beady eyes, looks to sneak up on your ass.

Another type of individual takes on their car features. These people are similar to people who buy Bobbsey Twin Dogs.

Can you imagine dog, owner and car look alikes?

MUSTANG! With a horse faced owner and an English bull terrier
or
a Dodge RAM sitting with and old guy with waxed hair around his ears and poodle to match.

This is just a small sample of the individuals that are out there driving on the streets,behind wheels of cars.

The Rest of us, untalented, having no life, people on the road,

who spend most of our time watching them,in fear for our lives,

are individuals too and I must say, without bias, the best of the bunch.

We fit into both the individual arena and the social arena.

We are somewhere in between the Dr Jekylls and the Mr Hydes,

In between the Rams, the Kias and the Hummers.


We are the Volvos and the Vans and the Station wagons

But wait. It’s not that simple.

We can camouflage, by souping them up and when we put on them dark glasses……

despite this we still social..
as long as we live together..
to me its so hard to live alone
best regards..

lol
Yes people are social
This was meant as a joke.
Thanks guys.

JDS - Here is one for you.
In a brand new caddi doing 65 mph a woman was doing her make up looking into her rear view mirror. The guy watching her, looked away for a couple of seconds and when he looked back she was still working on her makeup. Men don't scare easily but she did cause he dropped his electric shaver, which knocked the doughnut out of his other hand. IN all the confusion trying to straighten out the car, he knocked his cell phone into the coffee, between his legs, splashed and burned Big Jim and the twins, ruined his phone, soaked his trousers and disconnected an important call.

Now I know ....women are stupid.
but we are all individuals.lol

People are social animals but they are also psychologically adaptable to any circumstance. Once they are used to being alone, society becomes disturbing. You lose the ability to socialize the way people expect you to.
Scientists working in the antarctic have shown this to be true, writers to name a few who are mostly in their heads.:)