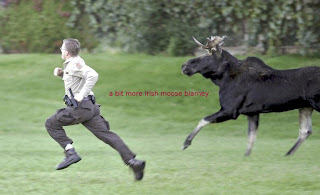 If you liked the moose song on the Moose blog then the Moosekateer Club is for you 
You must not bring pet moosequitoes as they might make the campfire meetings a bit itchy
(Especially if you are hung like a Moose.)

But never fear. We’ve gone through worse things than moosequitoes and upset moose.
What's worse than an upset Moose you may ask????? Well, try a love sick moose.
Our Scout Master Brady and his wife Biddy, sure left our relatives with a lot of memories from their camping trip with them.

Like, the last time when we all went to Big Moose Mountain.
Biddy made sure to get every one together and gave them each their duties to perform.
We hiked through the swamp to the foot of the mountain and then stopped because every one was hungry.
Biddy asked Brady to prepare the meal.
Brady tried and tried and then exasperated came to Biddy and told her he couldn’t with the matches she gave him.
Adamant, Biddy became agitated with Brady because she said she tried them all and they worked perfectly fine before they left.
It was a blonde moment.


Luckily Brother Conor had edible underwear he bought in Britain so with a wee bit of Irish luck and wee bit of sun,
the shorts spontaneously combusted and every one had some cherries jubilee to eat.
Modern inventions have their good points. Especially with dessert.

But they were still hungry so they sent two younger Lads, Angus and Dermott, to see if they could get some moose meat.
The lads didn’t have to go very far, maybe ten minutes from camp, when they spotted one and shot it.
They began to haul the moose by the tail, back to our camp, when they met another hunter.
He asked them why they were pulling the moose by the tail. The lads said they didn’t know. They were from Ireland.
So the hunter told them it would be easier to pull the moose by the antlers.
So they did
A few hours later they were bushed and wondered why they were so far away from camp?
Biddy and Brady had to send a moose party to find them.
They never did find the hunter who led them astray.


Meanwhile back at camp, it was getting dark and the hikers were getting edgy.

Dermott’s motherinlaw, Maude, complained. She said “ Dermott was a perfect arsehole who didn’t have one hemorrhoid because his arse was as lazy as he was.”

To which Dermott's Mother, Bedelia, replied “If I had a face like yours I would teach my perfect arse to smile.”

Maude answered: “Funny. I hope you live as old as your jokes but it's hardly likely because your nose is so big it probably can’t smell, let alone see the future.”

Bedelia retorted “Oh Ya? Was it your face printed on those airline barf bags?”

“I wouldn’t know,” Maude replied “You’re the short one. When some one throws up, you must be the first to know.

Maude and Bedelia stared at him.

Maude said : “ And what did you do? Piss off your plastic surgeon?”

Bedelia added “Don’t talk to me like that. Ten cents more and I could have been your Mother.
Good thing I’m not, cause you must have been so ugly when you were born, your Momma probably got a ticket for littering.”

“MY MOMMA? My MOMMA?” Sputtered Moe. “ You two must be divorced, cause you both seem to have lost 95% of your brains!”

“Oh ya? “ Maude yelled back “ When they circumcised you, they must have thrown your brains away!”

“Well your face must be hurting” Moe yelled back “ Because it’s killing me.!”

“Ha Ha Ha “ quipped Bedelia.” That’s because before you talk, you should brush your teeth.
I can’t tell if they are teeth or cheese.”

Up to this point Brady and Biddy were just quietly working building up the evening camp fire.

Moe was gonna yell back but the moose party broke through the edge of camp carrying the carcass of fresh meat, hanging from
a long post they found.

Brady was very happy to see them and to quiet the arguing group he said:
“Gosh guys, dogs and cats get along better than you do."

Dermott, well acquainted with Bedelia's and Maudes sharp Irish tongues, heard the ending sentence and couldn’t help laughing :
” That’s if you don’t tie them together Brady. Then you’ll see a big difference.”

Dermott’s Mom just waved her hand in defiance .
“We’re fighting because of your perfect arse.” she said.

“Ya. That’s how it started.” said Moe handing Dermott a canteen of Irish Whisky.

“ I am glad this camping trip is just starting" he smiled.

"You need some hemorrhoids Moose.”

Oh, you make me laugh and smile. Thank you for this. Poor ol' meese.

Thanks Guys.
I was watching Craig Fergusen writing this and he is all about farts although his are Scottish lol

He has a wholesome approach to people
and is a combination of naughty wicked and witty.He'd have a lot to say about moose I am sure if you got him started.
I am not a comedian.
The picture I guess is supposed to be about a man being chased by a moose but I think the moose is playing and running along side the man.
:)

The story confirms what I know since long: When I see some peoples face, I am quite happy with the way my arse looks.

And could I please have the address of the Moosekateer Club?

LOL I enjoyed that!

great post.
Ive been watching your blog for a while now. I've been inquisitive as to what your real name is. My guess is it starts with a "J" or possibly a "V". Id say "A", but it doesnt feel right.

Prince Baro You must be a Prince of tides.Ebbing and flowing with the moon.Your guess is correct. My name might start with a J or a V or maybe an A even if it doesn't feel right. lol
I am also inquisitive as to what your real name is. I think it may start with a B or a P or an A or a C
although that doesn't seem right either lol

Does it matter?
Enjoy your day :)