Scary - but Not Beyond Imagination 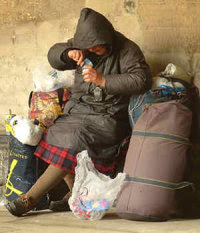 We took a drive to Mickey Dees, after getting the munchies .
It was after midnight and this place and Denny’s was still open.

It was disturbing to see a woman, with the little that she had, stuffed in a car,
sleeping in the parking lot. It seems she is doing this regularly.

It was also scary because if this person was living in such dire straights so
close to your home, how long would it be before more
and more people end up living this way?
We already have so many in Vancouver.
Could this be a growing trend which will one day include you and your children?

She must not have drug problems because she had a drivers license.
So it must be attributed to nothing short of bad luck.
It’s hard to find a place to go when the traditional family is destroyed and
government teaches people to depend on it instead.
Government can’t do much for you.
To ask government or credit companies or banks for help,
is to sell your soul.
Our system is not a “for sale” system but an “interest” system.

Looking at our banking system , it seems to be clearer and clearer that the business,
is not in the business of
providing people shelter in real estate, but in amassing interest from material
things people need, like shelter. That’s why they lease cars instead of selling them.
They are not interested in cash sales.

Interest systems, create a huge difference in the cost of living because people
need to make bigger salaries to cope,
which means prices need to get higher.

In spite of all the criticism about Mickee Dees and Walmart not paying people well,
I saw last night, that they did provide a service other places wouldn’t.
They provided this woman a relatively safe place to park and spend the night.

Hopefully she has a job during the day or maybe she collects social services
But one thing for sure, we didn’t have such things in the 40’s when we had a full scale
Depression. No one lived on the streets in those days.
Every one had families to take them in.

There are just some things that should not be played with and they include the
traditional family and shelter.
Families need to have a secure place to raise their families and banks
Are crossing the line here when they begin to play with peoples homes.
That’s sacrilege.

Banks have to know, that when they give a mortgage, it is for a 25 year period.
To change this would mean soaring house prices which in the end
become unaffordable for most people who then need to live in suitcases.

A new way will have to be found to live then.
Maybe people will buy bigger cars and live at Walmart or Micky Dees
or maybe they will have a tent or shack
they can open up on their car roof or maybe they can pull a utility trailer they can convert
into a home at night and park close to their place of work or parking lot.

Is this the future we are looking at?
It is appalling to think so.
Instead of attacking businesses like Walmart and McDonalds, maybe people should
Reflect on where price increases are heading?
Maybe price increases may soon lead to a system collapse where by to buy even
Food on interest could cost you a life of slavery.

Hmmmm
Scary thought but not beyond imagination.
Posted by A Lady's Life at 5:47 PM

JDS - So true .
The problem of poverty seems to be growing and since most people own mortgages, seems some bank accountability is in order.Comes a time a country needs to pull together instead of ripping itself apart.

It's sad that in our western and rather rich countries, there are still the poors and instead of reducing the number it increases.

Thanks for a very thought-provoking post. It truly is a shame that families and communities have been torn down so much.

well George that's why I am talking because when we went to school, they were teaching us our moral responsibility to eliminate poverty.
Instead, no matter what we do,poverty is growing because government and business decided to make people charity cases, instead of people with dignity and a desire for self respect.Our Liberal party did this with vote buying.
Charity doesn't help people.
People need jobs and to live self sufficient lives.
Instead we bring in more people and take jobs to other countries. and banks force people to continuously move so owners can jack up house prices.
They decide who lives where instead of people, who already laid claims to property.They fix things so you can;t hold onto property anymore.This isn't right.One Premier already told people, we need rich people to come here and the poorer ones to move on out and he was caught doing bad things.
So what happens to our kids?Will they be forced to leave the country? A country we helped to keep clean at a great expense to ourselves? Then its not worth it.
Make it unliveable and no one will want to come here and the prices will come down.