Encounters at the end of the WORLD 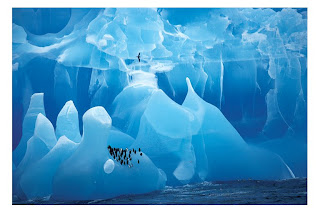 Multitasking,
I watched the program, "Encounters at the Edge of the World" where a small penguin decided to separate, from the group heading inland to lay and hatch eggs, and walk out into the vastness of the Antarctic where there was nothing but death waiting for him.

The beautiful, serene,mystic, Antarctic.
Scientists studying this piece of solitude, found that people are facing the same end as the dinosaurs did.

They said creatures that live under the water, are menacing and dangerous and this may have forced creatures to come out of the ocean onto land, to escape death.

They found such things as nutrinoes, which go through everything and are needed to create the basic elements.

Nutrinoes are so small, they can go through everything, including ourselves, which makes us a part of everything around us.

The scientists know how to calculate them but not see them.
They called them, like something out of the spirit world.

The only way to see them would be in a blue lightening light of maybe 1/100millionth of a second.

I have long believed that all that we are, was begot from the universe, through which we listen, when it comes to us. This is why Bethoven could hear music even when he was deaf. This is where we got our Picasso's and for all we know our Bible is enriched with messages sent from heaven to our prophets. And why not if we are all one?
God had said one thing we are closer to coming to understand. He said I AM and because he is,
we are.

Watts said it in reverse and this makes a lot of sense because we make noise and send messages back out there for some one/thing to hear.

Watts, if I am not mistaken,was a philosopher and studied a lot of Buddhism.

Can you imagine the messages, waves of explosions, fire and hurricanes,we send out into the universe?
If everything is attached to these waves in nutrinoes, then for sure man will live forever and rebirth is and will occur on other planets welcoming life be it in dust, minerals or ice water......
We do not need to be conscious of our existence to know or understand that we are.
We suffer, because we are conscious and it is this consciousness that creates differences like between good and evil, which otherwise would not exist. Life is about change and change does not consist of good or evil. Like everything else, it just is.

What happens, knowing all things go full circle, when all the noise we make in waves, comes back and attacks earth? Would Earth be able to withstand the echoes from the past or would they cause it to explode like a soprano's voice shatters glass?
Would this be good, evil or just change that needed to take place for no reason other than it just did.

It may be advantageous to our world, if we lived quieter lives or maybe it really doesn't matter at all.

Maybe by playing more symphonies, the universe will listen and become conscious of its' Glory.......and ours.

Blogtrotter 2 is still in Jamaica. Enjoy and have a great weekend!!

George: I think if we did send another message into space, it would lead to better things.
What goes around comes around as they say. :)