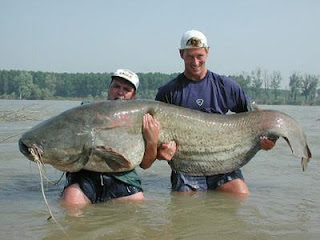 Rappers love money and power and this catfish represents a lot of power.
It is a fish which will not think twice to grab an animal, a child or even a sparrow from the banks of a river. It has a tremendous thirst for life and living.
Its a survivor surpassing even death. An amazing fish.

I rapped my way to cat fish mall

He looked at me and I at him

I said you’re fucked You have some gaul.

And I ain't half as tall as him

the cat fish jerked his head at me and

pierced his whisker into a tree

I gafawed at this lame display

But saw at once this was no game

The quill went into bark and tree and

this could very easily have been me.

The muscles rippled in his head and

I knew he was not dead.

His body quivered his eyes were cold

But for sure he was not dead.

He did the rap against the tree.

The Michael Jackson moonwalk next

And As he kept his eye on me.

I yelled hey friend, be cool, be cool,

It wasn't me who threw the spool and

He lunged again to take his bait.

Not learning once or twice or thrice

That eating me was not so nice.

The butcher then chopped off its head but

He wanted food and I was it

Thank you very much for your kind comment on my blog. Very much appreciated.

That is some fish!

Thanks George and Suzanne
This fish carries a lot of symbolism with it.
Its hard to kill. It may lie on the ground, seemingly dried out, and still be alive. It can never be underestimated. I remember when we chopped off the head of one and while we were cooking the still quivering body on a skillet, the head still bit very hard.
This fish is a life force in itself and really impressed me.It won't take no for an answer.
I'd hate to meet up with one like in the picture :)

Oh, man oh man, that is some fish! I enjoyed your poem.

Wow giant fish!
Is he the boss of the river? It must have taken a long time to become such size. I also feel awe and respect to nature.

My Mom always was afraid when we would go near the shoreline because something like this could come out.
In Florida there was a house I visited that had a creek in the back yard.
There was a small boat and they said a child saw a croc. So it told the grown ups who went to fish it out. What they found was the original croc and then a bigger one. There were two that could have walked into the back yard at any time and ate anything that was playing there. Scary.
In Florida I also swam with huge barracuda. I didn't know they were barracuda. They didn't seem to mind lol

Did your boyfriend catch that fish..I'm jealous
JDS

JDS No but I did come across one almost as big in the Richelieu River.
Apparently Lake Champlain connecting to it, had its own Lochness Monster.
They had 2 fishermen who disappeared. People knew approximately where they went fishing and when they sent a search party out for them, all they found was their boat broken in half.No bodies were retrieved. They just disappeared.
Then there were sightings of a strange thing that came out of the water. Of course it could have gone out into the ocean by now.
Man is not the only predator. I swam across that river every day.