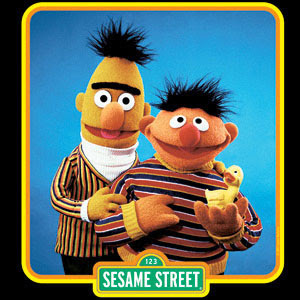 Excuse me if I am wrong, but are the puppets Bert and Ernie,not supposed to be children?
I mean , which grown up plays with rubber duckies? lol
Which grown up makes a mess when eating?
Which grown makes a nuisance of himself?
They never change clothes.
Now the gay population want them to marry?????
How dare they even suggest it?
Are they telling children now to marry young and be gay????

Watching Anderson Cooper today on CNN seems like he is on a holy mission to attack anyone differing their opinion from his, regardless.
Every day is about being gay,
instead of the news and the economic problems which hurt everyone, including them.

Their best question is : What if it was your child?

My answer would be that my child would have the same problems everyone else has in life.
Suicides, bashing and bullying occurs every where for one reason or another.
If you are a part of society, you are therefore not exempt just because the law says so.

People kill or commit suicide because of greedy banks, taxes, overzealous corrupt business
fraud and corruption,cheating spouses, drugs, hormone imbalances.....the list is long.I watched the atrocities in Sudan and Ethiopia.People, children, heads bashed for absolutely nothing except for being poor.
Poverty....mob riots.
This can all happen here overnight.
Why should gay people be exempt from all this fun? lol

I don't care one way or another what people do in private but when they cross the line of children, this becomes big with me.

Children deserve their time for innocence.

They need their time to play with rubber duckies, fairy god mothers, the easter bunny
and tall tales of heroes and villains.
They do not need to be smothered by gay issues or marriage.
I never remember asking my parents about marriage at that age.
My world was small and I was happy in it knowing nothing.

Born to confusion, how will kids be prepared to receive the next part of their education?

I am so glad my kids are grown now and I don't have to deal with this problem anymore but young parents need to pay attention.

The very nature of having to explain the difference between gay and straight people to kids gave me a nightmare. Like we don't have enough to worry about raising kids, we need this as well.

The saying goes :
Education is the light.
To live without it ,is to sit in the dark.
The scriptures warn however to make sure:
The light within you,
is not the dark

Thirty minutes later, the captain announced "One more engine has failed and the flight will be two hours longer. But don't worry we have two engines left".

An hour later the capain announced "One more engine has failed and the flight will be three hours longer. But don't worry we have one engine left".

One blonde looked at the other the other blonde and said "If we lose one more engine, we'll be up here all day"

These two had never a big success here. And what you write there is just deplorable ! Children should have a childhood and not be bothered with adult stuff which anyway they won't understand.

I agree Gattina.People have to know when to stop.Its enough they enter our schools and teach kids what they don't need to know instead of math, science and history.Parents can't say no and then you have problems with your kids cause of their peer pressure.

Thank you for sharing. Blessings.

Good morning my beautiful friend, just wanted to stop by and say hello to you and to send a BIG, WIDE HUG all the way from North Beach, Maryland!

Wishing you love for a GREAT day!
your butterfly friend,
fsb ;-)

I too wish you love and a great day Lady....your article is well thought out, said and expressed. God Bless you Lady