My Son the Pip Story 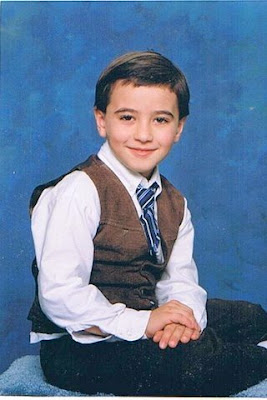 My son Nick (pictured above), was other wise known as the Pip because he always loved to wear hats and he loved clothes and still does. I could never buy him things without his approval.He was a ball man and when other kids went to the toy store for toys he was always hanging in the ball section. That's all he ever wanted.
He was a "self" man and still is.
That was some funny kid.
Today he is finishing grade 11 and has one more year to go before hopefully attending university.
When he was in kindergarten, he made me stay the whole year in class with him.
He never bothered with me but my presence was critical. At the end of the year the teachers said no more.
Nick should stay home until he decided to come on his own to school. So he stayed a few lonely days at home and then told me it was ok, if I sat outside the window so he could see me.
So Nick made me sit outside, on a chair, in front of the school window.
It was cold outside but that was where I had to be.
4th of July my Dad died and we had to rush to Quebec.
My Mom, who had Parkinsons and Alzheimers, lay down beside him to die and together they lay for three days.
By the time the neighbors found them, Mom was in critical shape herself.You can't stop Parkinsons pills cold turkey. Her whole body was seized up. They were taking them both to the morgue when they saw her pinky move.
I was calling all this time and couldn't figure out where they were either.
It took us from July to November to get Mom out of the hospital.
She lay on her side and developed a bruise which created a bone infection and the hospital was basically telling me to sign papers to let her die as well.
I said absolutely not!! My parents paid their dues and now they need help and should get what they deserved. The doctors said they would have to cut her leg off.
I told them no, you fix her leg.
It's tough for old people because they don;t want to spend the time or the money to do what is right.
The neurosurgeons have great power to over power your wishes and I was so afraid they would do that in my Moms case.
I told them she was ok and it's not her fault she is here. It's my Dads for not getting the help he needed.My Dad was what they called a Tete carre in Quebec meaning square or hard headed. They escorted English people out and he being a WW2 man, said this is my home and no one is pushing me out.

We all agreed that running from Quebec was the worst thing the English people did.
700.000 left for Ontario.
By the time we made it back to BC from Montreal it was December.
Nick had a lousy summer in the hospital because we had to go from 8 am to 8 pm every day to care for Mom because the hospital refused to. They said they didn't have the capacity to deal with difficult patients. My mom wasn't difficult but the pills she took for Parkinsons gave her Alzheimers.
They over dozed her at the outset of her disease.
The hospital was quite lenient with Nick and he helped give out the meals and collect the trays.They played with him because they knew how hard it was for a child to stay good. But he behaved so well they didn't mind.
We also found out there were two kind of Parkinsons, one I guess that is curable or containable, the one they want to make implants for and one with lesions on the brain, that is not. I think my Mom had the worse one.
She did not shake on the outside very much, like Katherine Hepburn.
It was all internal.

My son couldn't wait to go to school by himself after a hard summer. He missed his friends and felt left out seeing every one else going to school, while he stayed home.

The school in BC was upset as well to have a student so far behind in his studies.
But Nick did so much work over the summer holidays at the hospital and home studies till December, he was way ahead of every one in his class.
He was up to grade three work.
What I loved about our school was they did not follow a speed reading course but stressed on book enjoyment.The kids read an awful lot at his school. We showed the principal and teachers all his work and they smiled and were so happy.

He had a great year that year and plenty of time to get into mischief to make up for the first half of the year, he was not there.lol
We brought my Mother home and she was happy to stay with the family.
Nick had to be the babysitter instead of the other way around.
I don't know what went on in his mind but he sure did a lot of growing up that year.

We have a small family so what was so touching was, when we came home and parked in our driveway, our neighbor Lennard, ran out of the house and greeted Nick with so much joy, it felt like we really came home.
He was also a soccer coach and kept Nicks spot open for so long, so he could come back and play ball.
I will never forget the tears that came to my eyes to have such great neighbors that day. I was truly blessed and even through hard times, tomorrow always brings a better day. I love kids and this was such a nice gesture on his part.
It is true when they say God doesn;t give you what you want but what you need.
And we sure needed a good dose of Lennard that day.:)
We also needed a bigger house with my Mom so we moved a few streets away.
Posted by A Lady's Life at 12:40 PM

Family is so important. It sounds like yours found a way to work together. Nick asked a lot of you and then you asked a lot of Nick and you both came through.

Dr. John put it perfectly. A very tough episode to work through.

It certainly is. When you look back at your life, it is like a dream.
You can't believe it. So much laughter and pain and tears and struggles.... yes, God lets you see feel and touch everything to learn and hopefully make you a better person as a result.:)

Nice post! Thanks for sharing your world with us! Have a great week!

What a wonderful post about what families can do and overcome when they know they can depend on one another.

What a handsome son! I loved hearing about you and your life :) It was a bittersweet story, and yet with you both relying on each other at different times, you no doubt strengthened your bond!

Great post and that to me is what family and friends are all about. :)

I admire your patience ! I would never have stayed in school with my son and all you did for your mother, you must love her very much !

This story is so incredible. It truly sounds like a lifetime movie. Family is everything to me and yours is very blessed to have you. You son's picture is absolutely adorable. I love your mom's story. Love does cure all!

Have a Happy day!
Love China

Thanks guys.
You asked for stories lol
Children grow, life goes on and they forget.
It took 4 people to give my Mom the surveillance she needed to keep her safe. It was a huge responsibility and for my Dad to do this alone was not a responsible thing to do. He finally saw this because she kept him awake most of the time and called to tell me they were selling and moving to live with us. But unfortunately, he waited too long to do this.It was just too much for him.Neither of them wanted any help.Being free and independent was important to them.I couldn't go out there because I also had responsibilities at home.It was all very hard. :)

Gattina: yes I did and do still love my parents.
They were good people and I will always miss them.I think about them every day.
Even without a brain, I felt comfort in having my Mom sit with me, to watch her face, to see it light up when she smiled.There was no need for words, for we understood each other.:)