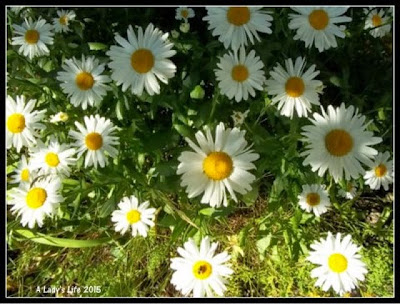 Love these daisies and the fact they are perennial and so easy to grow.
Don't ask me about the benefits of tea made from them because there are so many.
Easier to go to this website.

I never realized there were so many mens' magazines with so much was going on in them.
Since Germaine Greers' book the Female Eunich (I still have this book)
men have been feeling rather overwhelmed by empowered women and so all these new
male magazines popped up like Nuts, Zoo, Ladd.... dealing with male issues.

I was only aware of Playboy and I always enjoyed reading Play boy especially the jokes.
I  met Heffner once with my Uncle who worked at the magazine.

Apparently people were getting concerned because when they would interview rapists,
they found they all used  rhetoric, from  some of these magazines.
Nuts apparently shut down due to womens pressure groups .
The story goes that these magazines
promoted sex and vicious behavior towards women , normalizing sexism.

Thus love, the way women understood it to be, became further  demoted into gutter
trash and todays' woman helps promote this idea as she says her rights are the same as a mans'.
Well ok, maybe they are the same but why exercise that right when women don't need to?
So much classier being a true woman. No woman, needs to debase herself into manhood
to prove a point. We know who we are.

Now I have no objection to the bra burning part and with women having jobs and establishing
some independence from men, because we do have minds, but a woman, is still a woman.
Women can't be men and why would they want to be? Being a woman is wonderful.

That being the case, men should not have any problems when it comes to their manhood.
They just have better, stronger women by their sides, who can become better partners
in love, marriage and as friends. This should make it easier on men, not harder.

I remember when I was young, men always had a scent of cologne mixed with cigarettes and sometimes alcohol. Hair was worn sleeked back, except for Cookie on Route 66.
His hair was free and he always was seen combing it.
I loved it. He was so sexy!

I remember a boy asked me to a school dance once and paid a dollar for the entrance.
He did not know how to dance and kept tramping on my feet.
I accepted 1 dance with another boy and my date came back annoyed that I did that, saying he paid for me.

I took out a dollar and gave it to him. lol Seems this was what was important to him.. the dollar.
I was polite and danced with him in spite of knowing I would go home with no feet, but it was because I was polite, not because he paid a dollar and now owned me. He was not as polite,
not a sign of a gentleman.

Of course when he got home, there was a big discussion with his Mom and sister about what happened that night.  His sister asked me what happened and I told her. Then two women tried to explain it to him and forced him into dancing lessons. lol
Being free, is a womans' right.

Today we don't smell alcohol and cigarettes on men but fashion has them looking into mirrors a lot more than women do.
They worry about things men never worried about before, like balding.
Kojak was loved for his bald head. He looked so manly, powerful, being bald and at the same time, sensitive, walking around with his lolly pop. lol

Some women hate beards. I happen to love them. It makes men look so masculine (but
overly hairy bodies is another issue) .A man should look like a man.
Nothing nicer than to look at a man who feels good being who he is.
It's all about the aura he projects not body size , hair color, tatoos or skin color.

Men stand in front of mirrors checking out their asses and leg forms in pants.
This used to be a womans' job and women don't do as much of that anymore.
They don't fear men and don;t really have a need to please anyone but themselves.
If a man loves them, it should be for who they are, asses and all.lol

Some women wear makeup  others don't.
Today the natural look goes a lot further due to the nature
of a womans lifestyle which involves sports.

So much has changed between Lassies and Laddies and we have to attribute it to
womens' lib groups who brought all this to light.
If men are free, why not women?
They carry as much burden as men do in life.

I recently watched Maureen O Hara . My Dad loved her. She had beautiful red hair.
She said there are many things in life you have to contend with but you have to take it in stride..
In her movies she got good kisses and bad kisses but in the end, no matter who said what to who,
it was all about the paycheck and this was what she was there for.