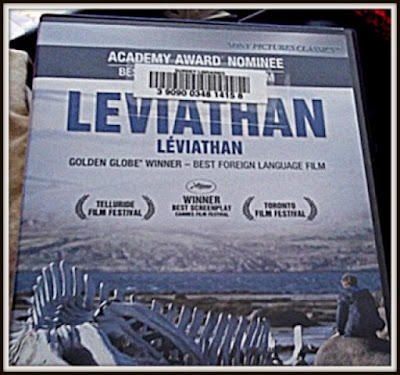 This is another foreign film I enjoyed albeit a sad one.
It is a Golden Globe Winner.

It is a story about injustice, something we all understand and know about
today, life being what it is.
A corrupt Mayor tries to destroy a mans' home business and land.
The man fights back by getting a trusted attorney from Moscow.
who proves not to be strong enough to fight this Mayor and his gang.

What is heart breaking is that this Mayor goes to church and sits like the devil he is, teaching
his son that God sees all, while the priest lectures on morals ethics values, and Christ.

"God dwells not in power but in truth
Not in strength but in love
Not in cunning but  the Lords' wisdom
Not in anger and hatred but with bravery
Truth is Gods' legacy
Truth reflects the world as it really and truly is
Without distortion
He who knows Gods' truth can find truth
and Gods' truth is Christ himself.
He who lives feels and does like Christ
Can tell good from evil
How can one preach freedom, while destroying the foundations of morality?
Freedom, is finding Gods' truth
Know Gods' truth and it shall set you free
Only a man who lives by Gods' truth, who defends it,
only that man is free.
True values are replaced by false ones and who sits in the church,
but these same people
who profess Gods' truth under pretentious conditions."

Power in the church and the town, is governed not by God but by corrupt  killers who sit deaf
to Gods' words, pretending virtues they do not possess for personal gain.

It is a movie similar to mafia movies we see.
The scenery makes it heart breaking to see a family destroyed the way it is
by greed, alcohol, self pity, and gluton.

The movie leaves one thinking that there must be a way to fight city hall as they say
but the job is not for amateurs.
You can't just say NO to the liberals or dictators of this world who say everything
is ok as long as it is their way.

On the news Montreal said it has to throw raw sewage into the St Lawrence River
for 2 weeks because they have no where else to put it, doing the repairs they need to do.
Forget that Beluga whales in that area have been tested to be living with so many toxins
that they should  already be dead.
Where is the justice and why is there no other place to put this sewage and why were they not
prepared to do this job the right way?
The buck continues to be passed by those elected to run this country but who don't know how.
This is similar to the marijuana shops who sell drugs to people without a professional license
proving they are qualified to do so.
Hurting the innocent is always the end result.

No one asks why we have so many toxins in our raw sewage?
People run in elections, to ask votes of other people who are ignorant or just don't care.

If it kills the animals in this world, man is next and yet human rights is used to kill innocent
people . The public does not understand that human rights, do not exist.
Privilege exists and privilege can be taken away by the same people vying for human rights.

Leviathan is a book by Thomas Hobbes and can be read on Project Gutenberg
Zvyagintsev and Negin won the award for best screen play.

Something to think about.
xoxoxo

Thanks George
I found the book good being told from the perspective of another
country.
A little different from the Mafia movies we see here in North America.