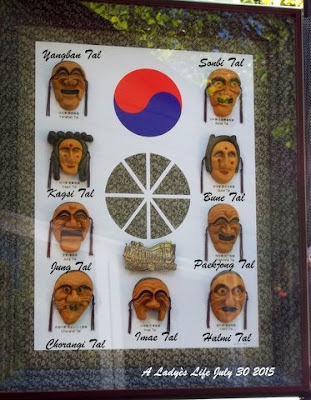 These are Korean masks used in theatrical plays or practices in shamanism .
Masks were made of alderwood.

Each mask represents something.

There is much talk about genocide these days and not every one is in agreement with the term.
So many words used by societies and organizations today are so distorted.
http://hawaii.edu/powerkills/DBG.CHAP3.HTM
In past 150 yrs Armenia, Holocaust Cambodia Darfur Rwanda Bosnia Native Americans all
claimed genocide.
12th C, Sultan of Delhi ,Kutb-d Din Aibak practiced what was called  Democide.

Democide is a term revived and redefined by the political scientist R. J. Rummel (1932-2014) as "the murder of any person or people by their government, including genocide, politicide and mass murder". Rummel created the term as an extended concept to include forms of government murder that are not covered by the term genocide, and it has become accepted among other scholars.[1][2][3] According to Rummel, democide surpassed war as the leading cause of non-natural death in the 20th century.[4][5]

I used to remember tribes in South America, who actually could claim genocide, but there is no one left to talk about them.They are hard to find on line or maybe I just don't know where to look.
Every one today, who talks about genocide, can only claim attempts at genocide  if anything. Even the Germans, can't claim to have succeeded and we have Israel to prove it.
The Germans did not only kill Jews. They killed every one and Slavs were next on their list to exterminate. How do you also explain people killing their own people like in the Russian Revolution, French Revolution,or Iraq and Syria, Hiroshima and Nagasaki etc...
Do you claim the killing of Non Muslims genocide? The aim is to kill Non Muslims not races of people, which is like 76.98% of the world?

If one goes into multicultural countries like Canada and the US, we cannot claim genocide since there are so many
cultures and races found here . There has never been total ethnic cleansing by the people claiming this was done to them.
When there is total ethnic cleansing, there is no one left to talk about it.
This then would be genocide.

A better term would be  found in the word Democide.

If you go back in time far enough, no one is immune to the word Democide.
There is war and in war, people die.
xoxoxoxo