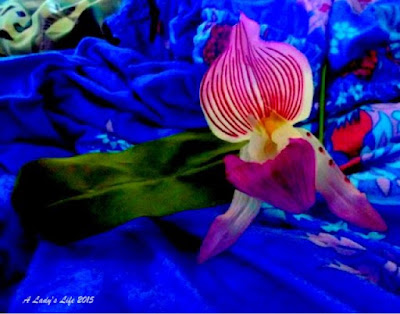 This is a very nice shot of my flower and
also good for a postcard.
It invites you into another world.
It tantalizes you to try something different and to
explore your horizons.
The days begin wet and damp but later on the sun comes out.
I hope today will be no different.
Vanity Fair and  Bruce Jenner is a sad story.

Will he be happier as a woman? It remains to be seen.
Most people would want to keep it private.
In his situation, he is rich enough to direct his own movies
and cross dress to his hearts' content without anyone knowing
anything.
He would not have had to upstage his wife and kids.
How can they compete now?

Looking into a mirror, what will his thoughts and memories be like?
Everything was built upon him being a man.

It is easier to make money making every one else do the work for him.
Think of how many shows will be inviting him to ask him how he feels now
and to have him say: Gee what have I done? Or maybe I love it in his mans' voice.
The questions of truth, will always remain .

People say coming out is better but how does it make one happy to do this?
Happiness comes from the inside , not the outside and Jenner still has a lot of issues
to sift through.
He doesn't have to spend a dime however and just keep raking it all in.
At 65? I'd say he can retire well , being truthfully,  what ever and whoever he wants to be.
The public will believe anything.

There are so many normal people trying to live normal lives, struggling,
to keep the good faith and the good fight and they lose because society continues to
destroy all the good stuff.
Yet society wants the good stuff. Otherwise why does the news want to keep
astonishing the public?

One day when it will be abnormal to be normal, the news will change and head back
into the right direction but at what cost, psychologically, physically, socially?
How much will it cost the children of the future?

When looking at a dismal picture of the future, maybe nothing.
Maybe it doesn't matter anymore.
When hope is lost, what is there left to fight for
or to believe in for that matter?
Maybe once the news gets the drift that it has to scrape its' fingers not just to print news
but to survive as a human, they will realize the hell  they created, to make them the criminals
people will want to stamp out, just to get some peace.

So sad that freedom , like everything else, is so abused.
We should be smarter than this, by this time.
xoxoxoxoxox

I'm guessing Bruce didn't do this for the publicity. I'm guessing he/she felt like coming out now would help make the lives of those who follow easier. I don't know. I don't have a point of reference.
It's hard enough for me to keep my wagon in the road.
R

Rick I watched his behavior on the show and he didn't like not to be the story line.
There are many ways he could have handled this. He didnt have to compete with the women on the show.
Some of these men are better women than women are.lol
Women just don't behave like this anymore.

Seems as a result of all this they want to pass laws to not include gender in birth certificates, passports etc... and trans gender bathrooms.
All of this is just going too far.
Why should these people be happy when the general public has to live unhappy?
There is always something to be unhappy about. People have to accept that unhappiness
is a fact of life. Life has always been a struggle from the moment you are born.