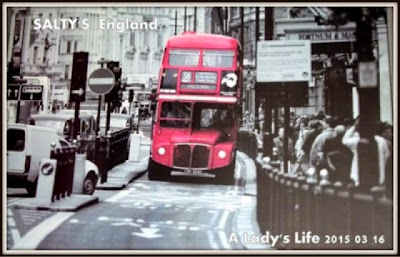 Salty's is a fun place to eat. on Hwy 10
Nothing but fish and days with all you can eat fish.
They have this picture up I guess in  reference to
Englands' Fish and Chips.
Prices are good too.

Was watching dogs who bark on TV.
They showed you all the ways to stop a dog from barking.

We live by a lane and a green space behind the lane.
Every night, especially in summer ,cars and people show up who
don't belong, and head on in to buy drugs from some house in there.
I would go check but I don't think it would be a wise thing to do.
They know where I live too. lol
We used to take pictures of licences and when they ask why,
we tell them for security purposes. It goes to the police.
So they stopped for a while.

Of course they don't like it when dogs disclose they are there and we get
immediate complaints to the SPCA for dog barking.
The amount my dogs bark, doesn't warrant complaints.
Just the fact they are there , annoys drug people.

The dogs are there to do a job and they do it well.
Why they dont catch the house selling drugs and stop people
from walking at night in dark lanes, is beyond explanation.

The SPCA can't say anything cause my dogs are old. Beau is 16
and on his last legs. We tell the SPCA, you don't like it? Take the dog.
They don't want the dog cause Beau is a nice dog.
Being old, they can't make money on him and this is what the SPCA wants today.
They would have to spend money to put him down.

The SPCA continues to help destroy the gene pool and pretty soon all dogs will
not be worth the paper people pay for them. No one can enjoy
a demented, in bred dog.

A dog has to be a dog. It has to play and be social.
It has feelings like people do. It gets scared like people do.
It gets protective of family as people get protective of family.
It's loving and caring like people are.
Dogs don't like marijuana coming into the bedroom through the window
when they sleep . The stink wakes them up and people talking outside are
a sign they don't belong in a lane after 9.pm when it's dark.
It is also not enjoyable to us to smell people having fun loitering
in residential areas.
Car doors slamming are not appreciated as they wake up the household.
They continue to slam till after midnight.

Sometimes I just have to shake my head and think people are the problem
but of course they blame man's best friend who has more intelligence,
respect, politeness and sense than people do.

Life is not headed in a good direction and you have to be old to see this.
Young people don't see it. They just don't know any better.
That's why they are easy to sway into criminal direction.

Some reporter women complained about Snoop Dog making passes at them.
Well, what do they expect ? They advertise the guy, make him millions and a role
model for young people to follow as a successful thug.
Thugs don't respect women. Women are bitches.
Women are there to serve their needs.

It's nice they complained but more needs be done like... don't buy what they sell.
Problem solved.

Have a good one.
xoxoxoxoxox