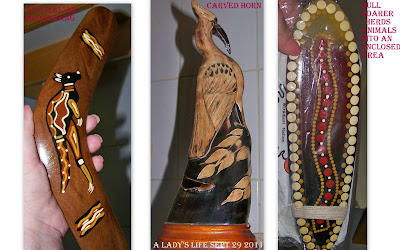 These are a few more souvenirs I have.
the carved horn is something I treasure.
The boomerang is an interesting tool once used by the aboriginals
and the third item is what Crocodile Dundee used, a bull roarer.
It is attached by a string and swung around creating a noise so animals go where you want them to go.
-----------------------------------------------------------
The new copyright law changes in Canada, will affect young people more so than older people.
Young people have no jobs so who is supposed to pay the fines?
Old people have no use for the new kind of music and in fact, would rather it not be played at all.
lol
So to add insult, to going so far as to be accused of injuring these new artists' financial gain, is obsurd.
Copy right infringes.
If something is on tv, it has been already purchased to publicize and to record.

It's like lending money to a person.
I was always taught, when you lend money, say good bye to it and be pleased if the person you lent it to, is honorable enough to return it to you.

It's a thing called a gentlemans' agreement.
Other wise you will be like the Mafia, forced to break legs and this is what these artists are doing.
They are finding ways to break legs through legal means by fining.

If something is on the radio it is already purchased to air.

How many times do you have to pay and re pay for something?
These actors, how much money exactly, do they want to make.?
Even Bill Gates has to change his products to continue to make money.

This is a cash cow and should be illegal to fine people for using what is forced on them to watch and listen to already.
We can't stop garbage entering our homes and to our childrens' ears and now we have to pay for it, if it gets copied by people who can't afford it anyway.
They put things out there to fabricate criminals.
They may as well take a society of people and put them all in jail, so Angelina Jolie and Brad can adopt another kid to drag around behind them and smoke pot and another
Charlie Sheen to show people how vice pays and rappers to buy more guns for gang
war fare. The list is long.

If they don't want people to listen and copy, they should
DO EVERY ONE A FAVOR
and just keep it to themselves.
They already made money on it and enough is enough.
A normal guy , should make so much money at work doing it the hard way, to feed his family
and now he has to pay for these spoiled rotten artists for products he doesn't want his kids listening to or watching.
Well I'm complaining lol
Have a great day!
----------------------------------
Posted by A Lady's Life at 2:18 PM

Beautiful items there is also two boomerangs purchased in Australia in my new home and they work.;)
Absolutely agree with you on the copy right issues, well said.;)
xoxo

That joke is hilarious!

I prefer a simple life. So, I listen to classical music radio, and I don't have a TV at all.