A Back Yard Bliss 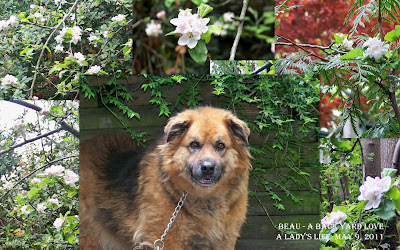 My yard is an overgrown forest.
I love keeping it this way as everything fits in.
The birds, flowers, trees, wild life and most of all, Beau.
Like everything else in the back yard, he is growing older and scruffier but he is the same
loving smart pup we got 8 years ago.
He likes to hide behind branches and play hide and seek with you because he never wants to come inside, thus keeping his old inherited dog traits
Coaxing him back in is not exactly my cup of tea.
He still needs a 10 year old boy to play with him but my youngest has already outgrown dogs.
Beau watches the wild life and keeps the coons and cats at bay.
He says this is my turf. No trespassers but it seems no one cares and trespass anyway. lol
Spring is a beautiful time in my back yard as things begin to grow again.
You forget winter and all the rain and concentrate on the glory of rebirth.
The smells of new fresh grasses and chirping of birds makes your heart flutter.
Nothing like nature at her best.

We finally moved on in Hockey to the next level.
This is the first time in 17 years that we got so far.
The Canucks played an aggressive game because they said they needed the rest in between series. The next series will really be a difficult one. Both Detroit and San Jose are stacked with excellent players and goalies.It's going to be a difficult haul.
Ryan Kesler really did a lot for this game and ended up the teams' MVP


Nicole Kidman was in the Nashville Audience. We saw her at two Nashville games.

With a bursting heart I wish you all a very beautiful day!
:)

After having dug to a depth of 10 feet last year, British scientists found traces of copper wire dating back 200 years and came to the conclusion that their ancestors already had a telephone network more than 150 years ago.

Not to be outdone by the Brit's, in the weeks that followed, an American archaeologist dug to a depth of 20 feet, and shortly after, a story was published in the New York Times:
"American archaeologists, finding traces of 250-year-old copper wire, have concluded that theirancestors already had an advanced high-tech communications network 50 years earlier than the British".

One week later, Canadian Dept. of Mines and Resources in Newfoundland reported the following:

"After digging as deep as 30 feet in NE Canada, Jack Lucknow, a self-taught archaeologist, reported that he found absolutely bugger all. Jack has therefore concluded that 250 years ago, Canada had already gone wireless."

Just makes one proud to be Canadian, doesn't it?

I wish that I could have a yard like that!

It's nice. I live by a bog so its easy cause its kept natural.
Neighbors don't complain too much as opposed to meticulous neighborhoods used to golf green grass.

Parts of our yard is also overgrown, but it's mostly with weeds. We don't have a dog, but perhaps Beau could help us keep the deer from our roses.

I love the yard you describe!

Beau is really "beau" a beauty in french and he has such a cute face !
Our garden transformed itself to a jungle, yesterday I cut the hedge a little, otherwise you had to be a contorsionist to get to the entrance !

Gattina - Beau came from Quebec and this is the reason we gave him that name. He is Beau and French Canadian
You hit the nail on the head lol