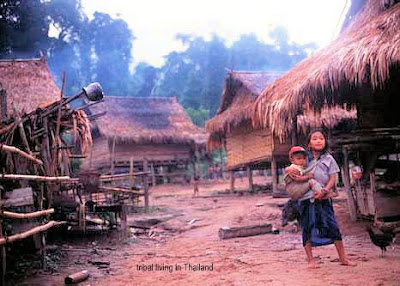 We in have been accused of making a mistake in creating reservations for our Native people.

Here, We see the Akha people facing the same ends in as our Native people did here in .

The old are not happy but the young are happy in that they can now function outside their group and have better incentives offered to them.

but the Christian groups in say No. They leave their cultural group and lose their opium habits and learn to live productively.

With civilization comes pollution. You cannot eat or fish or gather as before. Progress changes life from all directions.

In order to survive one needs to be able to adapt, to learn, to grow and to understand.

force them to change their ways but in the end, these tribes will not have a choice anyway.

No matter what we do on this planet, we have to understand that there was a beginning and one day there will be an end.

If man is to survive as a species, he has to grow and learn at a tremendous rate so he can do things we only dream about today.

If politics and wars interfere in this progress then we doom ourselves as a people of the human race.

There are no winners in war.

So opportunities people receive in cities of the civilized world, should also be available to tribal people so they also have an opportunity to document their culture and ways for future generations. Its important to know your roots and who you are.

Otherwise, all will die along with the past.

So in as much as I love studying and learning cultures, I also see the benefit of moving on

because to not move on, could result in total annihilation of a species called man.

I also believe in the importance of being self sufficient.

People should not depend on systems as much as on themselves.

Systems are to promote self sufficiency, jobs, creativity, enlightenment and mankind has to help

mankind in achieving this for himself.If the system stops helping man and instead helps only itself,

then the system is not working

the way it should.

We see in , for instance , deforestation.

A good system would replant what it destroyed continuing to provide jobs and a future to the people.

If the system does not do this then what use is it to the people? It is there only to help itself.

I have embedded this movie for Bill.

I wonder if it even still possible to leave an indigenous culture untouched.

I agree with the comment above -- we don't seem to be capable of leaving any newly-discovered indigenous culture alone. Sure, a newly-discovered culture is interesting, but perhaps we should ask whether or not they want to join our society.

I used to think the same way but now I am thinking they don't stand a chance with the world being the way it is.
It would be nice if everyone respected another man's turf but here their lands are being taken away, They can't farm and they only had enough rice for 3 months and no plan as to how they would survive after that.Used to be man was king of his own castle and now this is changing as well.
People lose their castles every day and no one cares.I find this disturbing because children need stability
In life you find the good the bad and the ugly.People either adapt or die.
Ask anyone who's gone through a war.

I still shake my head and feel ashamed for what our own Governments did to our First Nations. Sometimes I don't feel like being Canadian.

I do. The way to look at it Bill is that one day this can happen to Canadians and Americans. We could have our own Afghanistan and Israel here.Israel was always occupied by Jews and look how hard it is for them to hold onto it. If we are not vigilant, the same could happen here over food and water and or religion. Everyone thinks we have a constitution and that it will protect us but laws and the constitution are as good as the people standing behind them and people today just don;t seem to care. They think they are owed and the fact is they aren't. No one owes anyone anything. So in the end United you stand, divided you fall. Its in our interest to hold onto our values and fight for what we have and makes us happy.
I have embedded another movie in this blog for you to see.