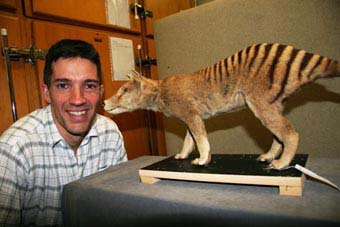 Yes.. it comes from Australia where many weird animals come from. It's like a wolf with black stripes on its back.
It is a marsupial and both male and female has a pouch . The females cover her mammary glands and in the male it covers the testicles.
It grew 51 inches from the tip of its nose to the base of its tail. The tail was another 26 inches long. It stood 24 inches tall, weighed about 35 - 65 pounds and had 13 -19 stripes.

http://www.wildlifeextra.com/images/tasmanian-tiger.JPG
The color ranged between a yellowish brown to a greyish brown.
They hunted sheep so many farmers wanted them culled and trapped to the brink of extinction.
The last one known, was a male and he died in 1931 at a London Zoo.
Some people still claim to have seen them but no one had proof.
Many, like Ted Turner, gave over one million dollar rewards to catch them to prove they are not extinct, but they would not have to pay because of the anti trapping laws now in Australia
http://www.wildlifeextra.com/images/tasmanian-tiger.JPG

This is another unusual animal that I haven't heard of. It would be nice to think that some still existed. Thanks for further educating me.

That's a shame that they had been extincted ! If we don't pay attention it will happen to other animals too !