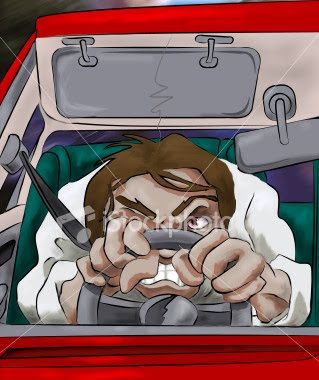 My husband is a typical stereotype of a male who would rather die than look at a road map.
His typical response is, all roads lead to Rome.

This type of thinking is ok if you live on an Island like Montreal, Singapore or even England for that matter.
Eventually, if you don’t find where you need to go, you either run out of gas or find home again, which makes a passenger like me,
grow exceedingly red in the face, ready to blow up knowing you are never going to get where you are going. Loll

The other example is Hyacinth, in Keeping Up Appearances. She either gives too many instructions or misreads the map. She can be very annoying at times and one praises her angelic husband for putting up with her.
One wonders who gets the raw end of the deal in the car at times,
the driver or the passenger. lol

You can't imagine how grateful I am for the people who invented the GPS system today.

Men, on top of being stubborn, are also gadget addicts. They like remote controls and the GPS is another toy to tinker with.
After adjusting it with all the noise it can make for speeding and such , they enjoy sitting and fighting with the voice which
annoyingly never gets annoyed, when ever they make a mistake and go the wrong way or miss an exit it says is 400 meters away instead of 200.

Funny enough, after all the complaining about how empty headed women are, men don’t choose a male voice to direct them but a sexy woman's voice.

Guess they feel better to argue with a robot woman than a robot man. lol I guess it's
a man thing since men always know where they are going. Arguing with another man is not
an ego booster and defeats the purpose of the argument.

With the GPS you can relax cause you know eventually men will find the way and all roads do not lead to Rome.(home)
So..... while they fight with the GPS system, you can sit, read,take in the sights, ignore them or take a nap

I must get one for my husband

Anji - I love it. We have soccer games to go to and sometimes the field is hard to find, hidden in a little nook and it just makes it so much easier. Even my son uses it.

All ways lead to Rome? I have heard this expression many times. And it is a bloody lie. I have have taken many roads in my life. And it never brought me to Rome.

My husband uses the GPS even when he knows where he's going!

We love our GPS and it uses the female voice. I guess I have become to a female voice telling me where to go!

I am a GPS fan ! I found my freedom with it ! I am unable to read a map, never could and never found the right way I got lost each time I took my car. Finally I wasn't driving anymore only from house to city center, the ways my car knew by heart. Since I have the GPS (female voice, I trust more women than men) I go everywhere, I just feed it with the adress, sit relax in my car and follow my guide ! When all my friends my age' gave up driving (more or less) I discovered it ! and now I am off to the sea 100 km driving, lol ! Without GPS I would have landed in the Alps !

Peter - all roads lead to Rome (home)
lol If you live on an island thats the only place it can lead you if you are lost.

George: So do we Its the best invention ever.My husband tried putting it on the male voice and didn;t like it.

peter:
"All roads lead to Rome" was an expression used in ancient times to show how Rome controlled its Empire's landscape and people.
Rome's interior roads were narrow and winding but the Imperial roads were wonderful for soldiers and an army to march on. So they used to them to leave Rome and to come back to Rome on.
I use it in the context that all roads lead to come home because home is where the heart is.

My husband adjusted the GPS to clunk when ever you pass a certain speed to remind him to pay attention to how fast he is going on the highway.
So every few minutes we here clunk ....clunk...... clunk.....
He is enjoying it cause he sees the GPS works but my son and I keep wishing he would turn the clunker off.
He on the other hand says no its good for our son when he drives so he slows down.
Gadgets! lol