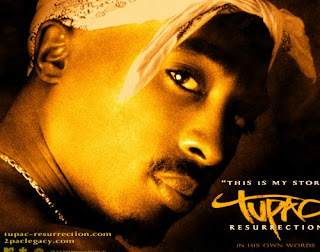 Last night my son and I had quality time together.
We passed the football and I found I still had it. lol
During this time we again got onto the subject of rap.
My son admires Tupac.
He got me a link and we sat down and listened to his interview with a reporter when he was 17 years old.

I was impressed. I told my son, Tupac's views were no different than my own.
Then my son showed me a written version of the young man's rap.
It was clean, no swearing, no abuse of women.
He basically just really tried to get kids to do the right thing.

I told my son something is missing. There must be more to this story. He must be involved in either drugs,guns or gangs. My son said no but then, I found out the boy's Mom was a Black Panther.
Then it all clicked together.
Going back in time, this was a time when the USA was involved in a Cold War with the USSR and Cuba.
Talking to a communist, let alone being one, was enough to put you in jail.
The US had serious problems.
The Black Panthers was a serious group to contend with, fighting for black rights and communism.
Malcolm X was a communist revolutionary.
His Mom was raped by a white man and he hated white people so he changed his last name by putting an X behind Malcolm.
Malcolm X and the Black Panthers were involved with each other.
Malcolm X was working towards breaking up the US into two countries, black and white.

Anyway. Tupac said his Mom could not get a good job because of her Black Panther background. It haunted her wherever she went, so they had to live in poor rough areas and he didn't like it.
It seems his Mom groomed him very well because he was a well spoken young man.

In California he reformed the Black Panther's. I think this was where he went wrong.
No one wants the rehashing of this period in time.You need to work inside the system, like Obama, not outside. The Lenin ideology did not work.

I told my son, first it takes half your life to study and learn before you find a voice to have an opinion worth airing.
Second, you can be an entertainer or politician or a revolutionary.
Third -The first two ....ahhh .....people may or may not like uniting but a revolutionary .......is a whole new ball game.
Revolutionaries usually stay clear of the public.
They are more like Bin Laden, hidden, hated and hunted.
My son admitted to Tupoc being a revolutionary. I asked him how having views people all agree on, made him a revolutionary?
Well now we get back into the Black Panthers.
My son said this group was not a big part of his life, he was a kid.
I told him that may be so, but his Mother was and no one knows how deep he was involved.
Obviously enough to step on a few toes.
My son said his death was a random drive by shooting but I have to question this.

We left the conversation with me saying it was too bad Tupac ended up the way he did.
He could have made his money and done something good with it, not just for black people but white people as well and why not even for the world?
He had what it took had he not got involved in something which had nothing to do with him or his life.
The Black Panthers was his Mother's time and since then, a lot of things have changed.
People are tired of fighting. Every one wants peace.

You learn from the past.

Great post! My hubby also admires Tupac. His music was very inspiring. Thanks so much for your sweet visit! Have a wonderful day! :)

Sun - you are correct. Some things change and some don't.Like the classical black dress. It is not a fad that comes and goes. It's class and it's good and it will transgress time because every generation will like it and wear it.
If you are referring to racism, you are correct again.No one can make you like someone.
But it is more of a question of personal taste than of race. Black people don't like black people. White people don't like white people.
Black don't like white;white don't like black,clowns don't like mimes etc...but together, we make a good world and put on a great show.
Gradual change is always preferable to war and revolution where many innocent people get hurt just for being in the wrong place at the wrong time.

Lisa Thanks. I don't like rap. I find it irritating on the brain lol but I try to keep an open mind.lol