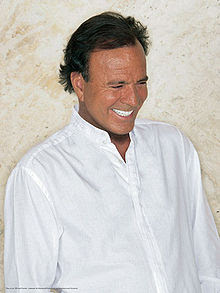 Julio Iglesias is the eldest son of Dr. Julio Iglesias Puga (from Galicia) and Maria del Rosario de la Cueva y Perignat; Carlos is his younger brother. When the singer was 61 years old, his 89-year-old father sired more children: half brother Jaime (18 May 2004), half-sister Ruth (26 July 2006). Julio's siblings were born of Dr. Iglesias's second marriage to Ronna Keitt.
In the early sixties, when he was a law student in Madrid, he briefly was goalkeeper for one of Real Madrid's youth soccer teams; however, a 22 September 1963 car crash truncated his footballer's career: I had a car accident; [a] very, very strange car accident . . . I lost control of the car, and rolled it, resulting in what they call 'paraparexia', which is not a paraplegi[a]. It's a compression in the [spinal] cord, in the sense of the neck . . . my spinal cord; and I was very, very ill for three years.
His doctors thought he would never walk again, but slowly, he began recovering his health. To develop and increase the dexterity of his hands, he began playing guitar. When recovered of health, he resumed academic studies, and travelled to England to study English language, first in Ramsgate, then at Bell Educational Trust's Language School in Cambridge