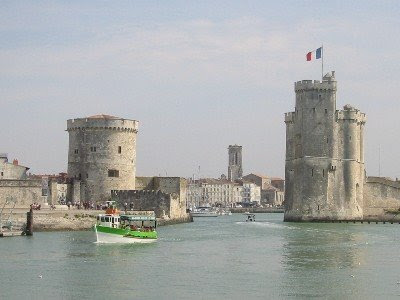 La Rochelle is a city in southwestern France and a seaport on the Bay of Biscay, a part of the Atlantic Ocean. It is the capital of the Charente-Maritime department.
The city is connected to the Île de Ré by a 2.9 km (1.8 mi) bridge - the longest in France - completed on May 19, 1988. Its harbour opens into a protected strait, the Pertuis d'Antioche.

Because of its western location, which saved days of sailing time, La Rochelle enjoyed successful fishing in the western Atlantic and trading with the New World, which served to counterbalance the disadvantage of not being at the mouth of a river (useful for shipping goods to and from the interior). Its Protestant shipowning and merchant class prospered in the sixteenth century until the Wars of Religion devastated the city.

Robert de La Salle departed from La Rochelle, France, on July 24, 1684, with the objective of setting up a colony at the mouth of the Mississippi, eventually establishing Fort Saint Louis in Texas.

The city eventually lost its trade and prominence during the decades spanning the Seven Years' War, the French revolution and the Napoleonic Wars. During that period France lost many of the territorial possessions it had in the new World, and also saw a strong decrease in its sea power in the continuing conflicts with Britain, ultimately diminishing the role of such harbours as La Rochelle.

In 1809, the Battle of the Basque Roads took place near La Rochelle, in which an English fleet defeated the French Fleet of the Atlant

Hot Summer Lambada
Posted by A Lady's Life at 11:00 AM

Interesting stories of the history.

The view is kinda interesting as you can sail into a castle like setting.
To think La Salle was there and the name itself,ROCHELLE, has somewhat of an exciting innuendo of mystery about it. Such places intrigue me.:)

Hi Lady!
Sorry for the long absence! But don’t you think it was a great vacation; some very busy weeks and just a few days off... ;)
This picture of La Rochelle is awesome; amazing way of entering a castle!!!
Meanwhile Blogtrotter is still turning around Iceland. Enjoy and have a fabulous weekend!

Very intriguing indeed! I was going to ask if you've ever been there as I know you've traveled to some far off place previously? How cool would that be to enter into a country this way!

Vicky: No. My husband is the globe trotter in our family.
I don;t think there's a place in this world he hasn't set foot on.
I spent most of the time in Asia with him. I travelled the US. I set foot in Kuwait which was a disturbing and frightening experience for a blonde woman.
I visited Holland which was the exact opposite of Kuwait lol Another extreme.
You learn many things through travel. I think its great to travel to places where you can learn something. Rochelle seems to be a place I'd like to visit in a sailboat. Sailing is my lifes dream.:)

GMG what vacation are you talking about?
You're whole life seems to be a vacation hahahahaha.:)

Are you compiling a list of places to go sailing?

I must go down to the seas again the the vagrant gipsy life
To the gulls way and the whales way where the winds like a wetted knife.
And All I ask is a merry yarn from a laughing fellow rover
And quiet sleep and a sweet dream when the long trick is over.
by John Masefield.