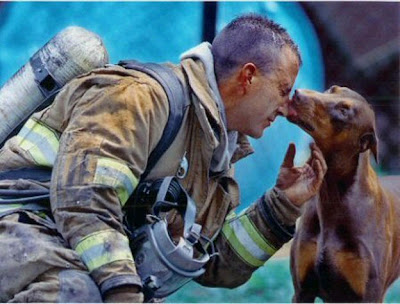 Just got a soundtrack, is there supposed to be a clip with this?

Great sound track I must say however :)

It's just a soundtrack.
Hi Guys!
The picture depicts a pregnant red doberman who was grateful the fireman saved her.
I had a similar dog we bought/saved from a pet store. It was about 8 weeks old big boned and when she looked up at me from the small crate they put her and another dog in, I knew I had to buy her even though I was not looking for a big dog.
Anyway, we brought her home and she became very ill. High temperature, lots of pain. She would growl and bare her teeth. We took her to the vet and he accused us of abusing the dog. I showed him my receipt I got the day before and told him go to this person. The dog was throwing up rice and wood. He pumped her full of drugs and gave me a few tubes of horse yogurt to give her every few hours. We pampered her and she grew up into a long legged beauty,so well trained and loving.
We named her Cindy.
When we moved we found a home for her with a Singapore General. He told us Female dogs were considered stupid and especially Dobermans, were hard to find homes for but it took him all of one minute to decide he wanted her.
This song Cindy was hard to find. I could only get a sound track.When I heard it, it reminded me of my Cindy.

My bad, it's a very nice song on it's own (I always liked the beach boys version). That's a very interesting history about your dog :)

And this is not the first time that you show us a beautiful story of life. And that is why life is great.

My Cindy was a darling but I often wonder what happened to her. The home she went to had lots of guard dogs and the General said his daughter feared these dogs so I guess he was hoping with Cindy it would be different.I know she would make a very good family pet but surrounded by fierce brutes such as the dogs he had, I am not sure what plans he had for her. Anyway, she was the easiest dog to train and we knew we had her heart .
She knew we saved her.
Animals are funny. When they are in trouble, even man is some one they trust to get help from.Like the baby racoon that fell from my roof. He was so distraught he just wanted help and didn't care from who. Had we not lived in the city, I would have let him hang around lol
He was adorable and cute.lol