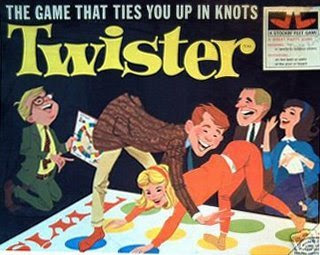 Q: What do you get if you cross a bear with a toilet?

Two immigrants arrive in the United States and are discussing the difference between the Old Country and the U.S. One of them says that he's heard that people in the U.S. eat dogs, and if they're going to fit in, they better eat dogs as well. So they head to the nearest hot dog stand and order two 'dogs.' The first guy unwraps his, looks at it, and nervously looks at his friend.

It's the spring of 1957 and Bobby, a pretty hip guy with his own car, goes to pick up his date. When he goes to the front door, the girl's father answers and invites him in. “Carrie's not ready yet, so why don't you have a seat?” he says. “That's cool,” says Bobby.

Carrie's father asks Bobby what they're planning to do. Bobby replies politely that they will probably just go to the soda shop or a movie. Carrie's father responds, “Why don't you two go out and screw? I hear all the kids are doing it.” Naturally, this comes as quite a surprise to Bobby, so he asks Carrie's dad to repeat it. “Oh yeah,'' says Carrie's father, ''our Carrie really loves to screw. She'd screw all night if we'd let her!”

Well, this makes Bobby's eyes light up, and his plan for the evening is beginning to look pretty good. A few minutes later, Carrie comes downstairs in her little poodle skirt and announces that she's ready to go. Almost breathless with anticipation, Bobby escorts his date out the front door.

Chubby Checker Lets Twist Again
Posted by A Lady's Life at 8:02 AM

Well, sometimes fathers don't get it right. Luckily, I am not one of them.

lol
It's Summer
so

Let's PARTY!!!
and make sure we are twisting
lol