Pandora is Back in Town 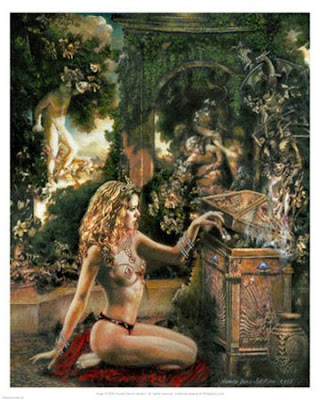 In BC we are having a provincial election and it is quite an upsetting one for me.

I heard on the news that the NDP and the Green Party are saying they have enough support to legalize pot.

Now why is it upsetting?
I am a Mother and I have kids out there.

For one thing, if the young people support this, it is a very bad sign.
It means our young people are the walking dead.
Young people are supposed to be vibrant, clear eyed, happy, future oriented people with lots
to live for and instead they already gave up before they even began living.

It means this Province doesn’t know right from wrong.

The Province cannot distinguish between good and evil.

The Province doesn’t care about making good judgement decisions which means
catastrophe and death to many people on the street.

It means a lot more angry people, will be walking and driving our city streets,
It means the Province will have more hungry, unemployed, homeless and sick to contend with and support. And the list goes on.

The only ones to gain, will be the people running drug sales, police, army and cemetaries.

Every one else will have to fork up to support the walking dead because they
will be the next NDP and Green targets. As it is most of your paycheck is going to support social issues. How much support do they need before we all do?

When you can’t or refuse to make money on your own, you look into the pockets of
people who worked to have a little for their old age, since there is no one to help there there either thanks to government. and social services bent on destroying families.

This is not right.
Something totally wrong is going on here and we should be wary of Pandora.

Pandora is back in town and she is not here to help us.
There is more to life than sex, work and paying social services for survival.

Otherwise why would people always look up to the sun ?

Is the future and hope sitting in dim lit, smokey dungeons?
Isn't this defeating the Green ideology?
We complain about cows farting.:)
We pass laws against smoking in public places.

Is it right for the NDP to create more misery, just to say they have a more important job to do to keep it at that level?

If people are going to die from pot, cocaine and heroin, what difference does it make to save nature or even pay into social services.? No point to it at all.
No one will live long enough to enjoy it.

You die either way.
Young people have a lot to do in this world and they
should stop clouding their eyes and get to it.

Don't vote for pot. Thats desperation talking.
Vote for innovation, business, prosperity, a clean life.
Thats why the sun shines. It shines for life!
Posted by A Lady's Life at 9:01 AM

This is a tough issue.

Just out of curiousity: how do you feel about alcohol being legal?

Another worry for parents....it's not like you need another one.

We need some things but we are not talking about alcohol. We have enough MADD Mothers talking about Alcohol and we have enough people standing on sidewalks waiting for the light to turn green, being run over by drunk drivers who drive slow and don't even know they crushed some ones head.The police let them go, to drink some more and drive without licenses while Mothers sit in hospitals crying because they lost something precious, something money can't buy. What we are doing, is adding to alcohol(two wrongs don't make a right) and if you think legalizing pot will stop violence and gang wars,dream on, it won't because it will shift the paradigm into cocaine and heroine. When is enough enough?
If you go into downtown Vancouver, you will see homeless people living packed on the street, as if it was a flea market and they have goods to sell... but they don't. What is worse is they have money for heroine. They aren't smoking pot. They are shooting up right under police mens noses. No one does anything about it. But you have to stand there and think, how did these people get to this level? Where did it all begin? It all began innocently and it was fun. No one was supposed to get hurt.One day you have to think, this could be me.
Freedom is for civilized societies who know or understand that freedom was fought and obtained by and for people who know enough about self control and the difference between right and wrong. People who know what a responsible society is and it's all in the interpretation isn't it?
When does it get to the point that you and your drug habits interpret they are more important than the rights of old people(will you slap your old mother around for money, threaten to kill her for money to support your habits) or the rights of children (where social service money you get, will not be used to buy food?) or the rights of the sick?
You will do anything for a hit.
ANYTHING.
I have nothing against alcohol.
I love a good bottle of wine as much as anybody but I don't drink when I travel, I don't drink when I drive. I don't drink when I have important things to do, which requires a clear head. That's called self control.Mixing alcohol with drugs can be lethal and young, strong people (Heath Ledger comes to mind)don't see this. It will never happen to you.... will it? but what if it does? :)

First, would you believe that my word verification is "pothesh?"

I like the point that you make in the comments about legalization causing the paradigm to shift to cocaine, etc. I think that's true.

I'm praying for you up there, especially since I agree with you and that if it's legalized up there, it's only a matter of time before it's made legal here. Don't give up.

The modern society has given a lot of progress to people. We sometimes enjoy some of them without rational consideration. We forget on what happiness are based. Sunshine speaks nothing just smiles to those who realized its existence.

The people who made and passed these rights and freedom laws were different people from what we raise today. They gave value and meaning to words and to life. They wanted man to stop preying on man.
Children were sacred in those days.
Today children are preyed upon by pressure groups and criminals and its ok.

Today freedom laws help man prey on man and lawyers and judges help the predators and convict the innocent to everlasting hell.

You don't have to have religion to see something is wrong with law today as well as with the system and judges. The wrong people have become judges and the wrong people run for government. They killed the meaning of law because they know people don't care.
People are not organized. People's votes are swayed towards corruption because they can't see beyond the "I want" word.
It's funny how we are all on the same page when something bad happens and change when it comes to voting.
How is it OK for a party running for government to say if you vote for us, we have enough people supporting us to legalize marijuana? Carol James stood up and looked into your face on TV to say she is on my side, and all I can say is, you are a liar and have completely no understanding of what this society needs and wants. We need leaders who know right from wrong, to lead,to teach, not to follow just to get a vote regardless of whether you are true to yourself or not.
Today people believe democracy means to follow. Following is very dangerous if the leader you follow is a bad leader.
Well I will not say any more.
Think I over spoke.
Thanks for your support. :)

Looking at the picture, I don't care for the box. But for Pandora, I would not hesitate.