Cholo- My Little Bandit - Fell From The Roof. 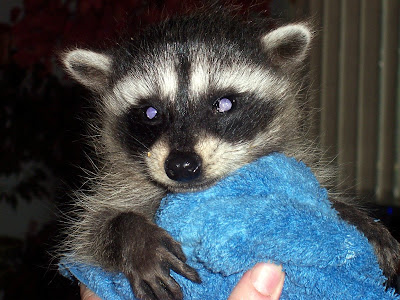 This is Cholo
He must be only 4 weeks old here.

He still has blue eyes.


I had to use a fish net to dig him out of my rain gutter.

We were afraid of him. He was all huffy with a bloody nose.

He must have had quite a scare poor guy falling 22 feet,

but he soon became so nice we thought of adopting him.


Alas, the laws here, do not permit such things. lol

When my son held him, he said:" I never thought I would ever be doing this

other males trespassing in their territory.


Cholo was very particular as to where he did his business.

till we took him out.


I had to let him go sooner than I expected . My son had

a Hawaii soccer trip and I went with him because it was rather far,


We had a wonderful time and stayed at the luxurious Hawaii University dorms, where Obama's Mom and Dad went to school.


The cafeteria had fabulous, buffet type, food where you could eat all you want.


Three meals a day cost us 20 dollars per person.

This is a great deal especially if you have a family.

What I also liked was they had laundry machines which took prepaid laundry credit cards to use so you never had to suffer searching for change.


The ocean was just a few minutes away. There is plenty to do out there. One never gets bored.


Hawaii must have the freshest air in the world.

The last two days, we got rooms at the Hawaiian Village (Hilton) and enjoyed a luau.


Cholo was left in my husbands care.
He saw the Mom in the grass and opened the cage door.


She heard her baby chirping and came to find him.

My husband said that was some awsome reunion.

The Mom first gave him heck, then put her arm around him,

kissed him and then they both walked off into the woods.


Have a beautiful day every one. :)

What a wonderful story! I like the picture, too.

aw that is such a neat story with some very good information as well. My sister loves Raccoons, allot of her decor on her walls in her home and on her shelves, etc., are Raccoons.

I wanted to thank you so much for the wonderful comment you left on my blog, I actually cried. The advise you gave me is so true, and you are the only person that actually took time and left any advise. I would really like to become friends and keep in touch, if you would like to of course. Again thank you so very much and God bless.

Oops sorry, by the way I have also added you to my blogroll. Have a blessed day!

I'm so glad that he was reunited with his mom!

What a lovely sweet story. I have visited so many places but have yet to go Hawaii, oh how I'd love it! And for the little guy to be reunited with mom while you were gone? Well that is just icing on the cake!

You are very welcome Jodi.I have family with fibromyalgia as well as the spinal symptoms you describe.It is not easy and stressing yourself out makes it worse.
You need to pay attention to yourself so you can get healthy.
Hope it all works out for you :)

Vicky: It is soo nice out there.
I searched for Elvis every where but he was no where to be found lol
Mama Zen, Thom and George, I also love happy endings.:)

What an ADORABLE face!!! How could you not want to keep it!

I can't wait for the next one to fall from the roof lol. All babies are cute but then they grow up :)

A nice story. And I have learned that I never should trespass on others territory. To avoid any danger.

He is living the life! Good for him for finding such a kind family.

lol Peter and Sandy thanks for the laugh lol
I see Peter is speaking from experience lol
Sandy ya he sure is living the good life ....in my roof. lol
If it wasn't so funny I'd cry. lol

So nice that you were able to look after him, and even nicer that he was reunited with his mom who can teach him the ways of the raccoon world. :-)