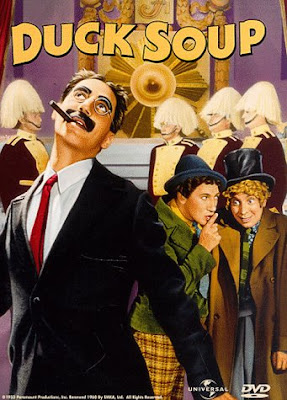 The ultimate in sarcasm known for his glasses nose and mustache
is Groucho Marx,
Born 1890 N.Y.
Performed at the Palace Theater, in comedy, with his brothers.,
Had 3 wives and made 26 movies
Died 1977 three days after Elvis Presley.

He was the subject of an urban legend about a supposed response to a contestant
who had over a dozen children which supposedly brought down the house.
In response to Marx asking in disbelief why she had so many children,
the contestant replied "I love my husband,"
to which Marx responded,
"I love my cigar, but I take it out once in a while."
Groucho often asserted in interviews that this exchange never took place

List of his Quotes:
I intend to live forever, or die trying.
I must confess, I was born at a very early age.
I never forget a face, but in your case I'll be glad to make an exception.
I read in the newspapers they are going to have 30 minutes of intellectual stuff on television every Monday from 7:30 to 8. to educate America.
They couldn't educate America if they started at 6:30.
I remember the first time I had sex - I kept the receipt.
I was married by a judge. I should have asked for a jury.
I, not events, have the power to make me happy or unhappy today. I can choose which it shall be.Yesterday is dead, tomorrow hasn't arrived yet. I have just one day, today, and I'm going to be happy in it.
I'm leaving because the weather is too good. I hate London when it's not raining.
I'm not feeling very well - I need a doctor immediately. Ring the nearest golf course.
I've got the brain of a four year old. I'll bet he was glad to be rid of it.
I've had a perfectly wonderful evening. But this wasn't it.
If I held you any closer I would be on the other side of you.
If you've heard this story before, don't stop me, because I'd like to hear it again.
In Hollywood, brides keep the bouquets and throw away the groom.

As we get older we sometimes begin to doubt our ability to "make a difference" in the world.

It is at these times that our hopes are boosted by the remarkable achievements of other "seniors" who have found the courage to take on challenges that would make many of us wither.

Harold is such a person.
He's often been asked: 'What do you old folks do now that you're retired?"

Well...I'm fortunate to have a chemical engineering background, and one of the things I enjoy most is turning beer, wine, Scotch, and margaritas into urine."

I have heard about Groucho Marx, but he is not so well known here. I have the same result since I am retired, I transfer every liquid into urine too, lol ! The ash cloud from Iceland hasn't arrived on my terrace, it's still white and looks clean, the sun is shining and the sky blue, but the airports are closed ! Poor people who wanted to travel yesterday and today ! They are all blocked at the airports.

Groucho's version of the truth could bite--hard. Maybe that's why he was so popular. He could do the talking for us.

Gattina : He can be so funny but He does have a sharp tongue for his time I like Charlie Chaplin He is less offensive . You almost want to hug him lol

This was very good. I liked Groucho's citations. And I might use them oon the blog, just as I did with your Dog Song (which is coming to an end soon).

And, though having rather an administrative and management background, I think I will imitate Harold in his activities.

lol Peter You surprise me.
You mean to tell me you are getting
a chemical engineering diploma?
Good Show ! :)