Fire On a Cool Wet Day and Dog Grooming 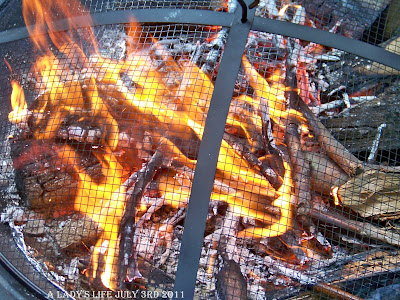 What a horrible story about the poor dog on a chain ! Is there no animal protection ?? Fortunately your son was there and you too !
I have the same problem with my long haired cat Kim ! She doesn't let us brush her and then is full of knots which hurt her skin. Once she had to be shaved totally by the vet. Now since 3 years I found a cat groomer and there she is just adorable. She lets her do everything even her belly and I had told the groomer that she was so difficult. Now I go 2 or 3 times per year to the groomer and she brushes and combs all the knots out of her fur. Sometimes she also has to cut them off.

The Moma dog was an outside country dog used to her freedom but the police told the people the dog had to be kept tied because of the deer being protected.. They told them next time they see the dog they will shoot it. So when they let the dog run free again one day they shot it.
Its sad. We have a law that if a car hits an animal on the road and if the car is damaged, the owners have to pay in Quebec. So the drivers speed up and hit the animal and keep driving.People are very cruel.
One day the neighbors kitten crossed the street and got hit in front of the children. It flew high in the air bounced a few times and then died.I was furious! because it could have been a child.
My dog is an inside dog and learned how to go through bushes chasing a rabbit. I saw a car coming and beginning to speed up at 5 am. So I ran into the street to stop it or it would have gone straight into the dog.The laws are not for families anymore.
They are for promoting crime.

I've never had a long haired dog. Sounds like a lot of work!

The easiest dog I ever had, was a doberman. Her name was Cindy and all you had to do was keep a wet cloth outside in a bucket and wipe her down before coming inside. She was the greatest.
She ended up going to a Singapore General who loved Dobermans and females were hard to get rid of there because they were considered dumb. Male dogs are preferred. But my Cindy was very intelligent.I trained her well to obey commands by mere pointing so she could be adopted by anyone. It took the man less than a minute to say he wanted her.I also bought her from a dog store because she was in distress.The vet told me I abused the dog so I had to show him my bill of sale so he could go to the real abusers.She was very ill with a high temperature and in pain.It took a week to get her back to normal of 24 hour care.She understood we helped her.

Such incredible beauty. All I can do right now is stop....