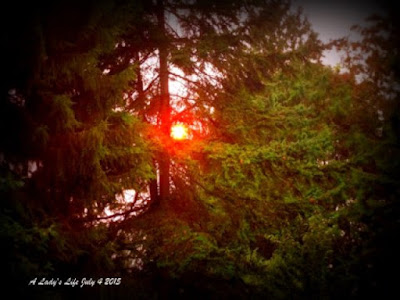 As 187 fires burn across BC, including Burnaby,  here in Surrey, haze covered many
areas ,. It was like the fires were quite nearby.
Scary actually, especially if you live where there are a lot of trees.
Our cars were covered in ash and people were warned to stay inside
to avoid breathing problems.Even so, it was hard to breath when you
smell the smoke crawling up your nostrils. It felt like at any moment,
the fires would reach us here in the lower mainland.

We took this shot of the sun between the trees because it was unusually
bright. They say it gets that way where there is haze and fire.
It didn't stay there very long and within minutes moved and hid
behind the trees.

We have a wasps nest again and as I watered it to get them to leave, one of the wasps
came and stung my back. They understood where the water was coming from.
Smart wasps.
We have spiders and when they see the wasps they run ;like the dickens to find a place
to hide. It's like watching a Disney movie. The animals behave like people.

I will be picking two cucumbers from my potted plant of 5 and some tomatoes are beginning
to redden. Something ate a little potato from the potato pot and it began to root so I will plant it into another pot and see what happens there. It's nice to have the plant even if there are no potatoes.

So this is life. You live grow listen look and the feast gets larger with every dawn.
Little children are taking over from your children who are now grown and have wee ones of their own.
The world continues to stay heated in politics
Donald Trump tells it like it is. lol
Pot is winning when in Colorado it was proved that this is a big mistake to let things happen.
Run away liberalism is not a good thing.