To Chop or Not to Chop 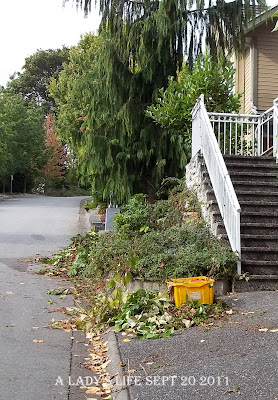 We don't have much of a front yard but it sure filled up with stuff.
If one looks tonight, except for the huge Japanese fir, everything else is gone.
chopped up and hauled away.
My green leafed, ground cover, which took me 10 years to grow, has been all torn out. The hydrangea, the palm, the rhododendrum...all gone.
The yard is peat mossed and tomorrow is the last day for roof cleaning and and the final touches.
Now begins the next part of the clean up with painting.
All the neighbors had a chance to say hello and tell us how nice the house looks without all the vegetation. We never see anyone as there is no reason to step outside but seems everyone did the same thing, replaced vegetation with peat moss or stone.
My guys are not letting me do anything so life for me is very hard lol
But I managed to put an old chicken to boil for the bouillion and my husband chopped up the potatoes and veggies to put inside the soup.
By nightfall the soup flavor was delicious.
Tonight was Charlie Sheen night. He was roasted and part one, of one and a half men, was aired
with Charlies' funeral and the introduction of Ashton Kutcher , his replacement.
It was hard to see his own cold hearted Mother with crocodile tears and only interested to make money selling his beach house.
Makes you wonder what was so funny people laughed.
Apparently Charlie got hit by a subway or something
Ashton Kutchur is going to buy his house I guess because he likes all the girls there,and the story will continue sans Charlie. I wonder if his ghost will ever appear on the show?
It will be renamed Men since the little boy is big now and collects his own chicks.
I guess my home was not the only one with chopping issues.lol
To chop or not to chop?
To chop or not to chop?
To chop or not to chop?
Posted by A Lady's Life at 1:17 AM

We need to clear up our garden before winter, not a job I look forward to but it has to be done.

I love a lot of vegetation as I like to be hidden from view.;) I had a very large hedge in my old house and now it has been cut back a lot as I am trying to sell it (the house). My neighbors couldn't be happier.;))
xoxo

A change is always good for the soul. I hope you'll be showing us a couple of AFTER pictures, too?

Amazing how the bug seems to have hit all of us at the same time. I, too, was out ripping and chopping. In my case, though, it was an attempt to make it look as though someone lived here!

zuzana - I also liked my bushes cause I had a very nosy and annoying neighbor across the street who moved away now.
She insisted I park my car in the garage instead of my driveway because when she backed her car out she needed to back into my drive way.
According to laws pertaining to her she is supposed to back her car out away and opposite from my driveway and besides no one else had the same problem but she made my life hell because I refused her.
It's my driveway after all .lol
But after she was gone the whole street relaxed. Now the trees were all over grown and needed to be torn out.The contractor over did it a bit with the tree planting, in such a small place.

thanks guys - hope you all get the bug lol it does feel good to get all this stuff out.
Its like feeling your head lighter after a haircut.lol